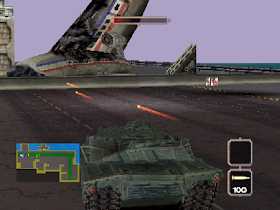 Genre: Action
Perspective: 1st-person, Behind view
Vehicular: Tank
Gameplay: Shooter
Setting: Post-apocalyptic, Sci-fi / futuristic
Published by: 3DO Company
Developed by: 3DO Company
Released: 2000
Platforms: PlayStation (PSX, PS1), Nintendo 64 (N64)
Tank battles in the post-apocalyptic world. Everywhere the ruins and only the son of the protagonist is the hope for a brighter future. He has telepathic abilities, but was kidnapped. Such is the plot of the plot.
The game itself Battle Tanx: Global Assault is made with a clear bias on the action and simplified management. In fact, this is not even a simulator, but a third-person shooter. A huge number of tanks are offered. Each with its own characteristics. There are a huge number of modes for multiplayer.
In general, about Battle Tanx: Global Assault, you can talk very, very long. You can go through the campaign with a friend. Missions are interesting in that in case of death you do not have to start it all over again. The fact is that in the game you will have a counter, which is essentially an indicator of your attempts (well, or money). Let's call it a bank. Losing a tank, you will simply lose some amount from the bank. The more valuable the lost tank, the greater the amount will be debited from the account. For the sake of economy, you can try to storm missions in quantity, not quality. The cheapest tank costs 5 credits.
The missions in Battle Tanx: Global Assault are the most diverse, but they all go against the backdrop of destruction and ruins. You will visit the railway, in the port, in various warehouses, in the centers of ruined cities, in a landfill ... The list goes on. The transmitted atmosphere is very happy. At some levels, fog with acid tones is excellently made.
It's time to talk about multiplayer mode. There are a huge number of modes, including the classic Deathmatch, team Deathmatch, capture of the flag (here called the capture of queens), war and many others. Up to 4 players can take part in battles. True, you can play with only one friend. The rest are computer controlled. The good news is that before the start of the battle, you choose your team (read, character) and set teams to opponents. Teams are distinguished by tanks and special weapons available in battles.
Weapons are also diverse and unique. Each tank has its own standard weapon. In addition, on the battlefield, both in missions and in single battles, you can pick up additional weapons. The types of weapons in the game are original and have nothing to do with real weapons. Weapons such as ground-based automatic guns, green rays bouncing off the walls, a miniature atomic bomb, rockets, grenades, etc. are presented.
‹
›
Home
View web version