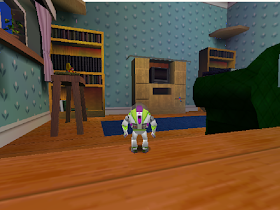 Genre: Action
Perspective: 1st-person, 3rd-person, Behind view
Visual: Cinematic camera
Gameplay: Platform
Interface: Direct control
Setting: Contemporary
Published by: Activision
Developed by: Travellers Tales (UK) Ltd.
Released: 1999
Platforms: Nintendo 64 (N64), PlayStation (PSX, PS1)
The player controls Buzz Lightyear where he has to locate and rescue Woody after he was kidnapped by Al McWhiggin. He can execute and jump a double jump, where he has two attacks: his laser wrist and his spider attack, both have to be charged. In addition, there are all 5 powers that can be unlocked by helping Buzz complete certain tasks. Many of the voices from the movie's cast return to the voice of their in-game characters with the exception of Tom Hanks and Wallace Shawn, who did not resume their tracks as Woody and Rex respectively (instead being the voices of Jim Hanks. for Woody and Earl Boen for Rex).