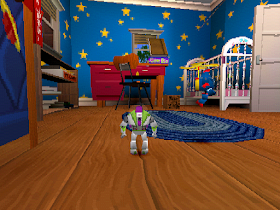 Genre: Action
Perspective: 1st-person, 3rd-person, Behind view
Visual: Cinematic camera
Pacing: Real-time
Gameplay: Platform
Interface: Direct control
Setting: Contemporary
Published by: Activision
Developed by: Travellers Tales (UK) Ltd.
Released: 1999
Platforms: PlayStation (PSX, PS1), Nintendo 64 (N64)
You control the cartoon character Buzz Lightyear, who must save Woody, but this time not from the clutches of a sadistic child, but from an obsessed toy collector. The main intrigue of the adventure is that Woody was once part of an exclusive collection of toys made several years ago, and our determined collector has already managed to get all the toys from this collection except Woody. And so our hero is destined to spend the rest of his life in a glass jar in the museum, unless Buzz and the team release him.
Weapons and combat abilities of the Base have unique features: firstly, the Base can engage in battle on the run; secondly, of course, this is his suddenly spreading wings, thanks to which he makes his famous "stylish landing". From Buzz’s built-in laser, he can shoot as soon as he sees the enemy; at this moment you can hear his heavy breathing and see a huge smiling face shining through the transparent visor of his helmet. In addition, Buzz becomes the owner of the flying boots, and when necessary, he can also count on the help of other characters already familiar to you from the original version of the film. They act in the game each in their own way. For example, when a Rex dinosaur is upset, he tilts his head and breaks everything that comes in his way from overclocking, and soldiers, at the minute of need, line up in a living chain to transport you some distance through the air, and Mr. Potato Head constantly gives advice.
‹
›
Home
View web version