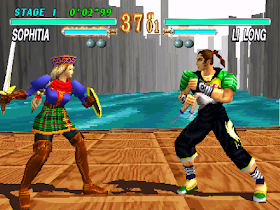 Genre: Action
Perspective: Side view
Visual: 2D scrolling
Gameplay: Arcade, Fighting
Setting: Fantasy
Narrative: Martial arts
Published by: Namco Hometek Inc.
Developed by: Project Soul
Released: 1997
Platform: PlayStation (PSX, PS1)
Namco, a recognized authority in the field of creating fighting games, decided not to limit itself to the famous Tekken series. Another game of the same genre - Soul Blade is worthy of competition Tekken 2, but in something, perhaps, it surpasses. Each of her 10 characters has her own weapons - a sword, a spear, a pair of nunchucks, etc. In addition to the familiar health meter, there is also a separate energy meter for this weapon. When you block the opponent’s ular with your weapon, the energy level decreases; when it reaches zero, you lose your weapon and become much weaker. The graphics in this game are gorgeous. All the characters are written out in extraordinary detail, right down to the features of the face (they can best be seen on the Winner Screen), they move absolutely natural. For example, light flashes are very beautiful during every strong blow. And several fights take place even on a platform floating on the water, and it sways from the will, which, of course, affects the course of the bout.
The best fighting games always attract an abundance of game modes that are able to rive you to the screen for a long time - alone or with a friend. There are seven such modes in Soul Blade. In Arcade mode and Vs Mode, you can use any character In Team Battle Mode you can create a team (up to five fighters) and compete with another team. In Time Attack Mode, you can experience how quickly you are able to deal with opponents, and in Survival Mode, how long you can fight with one health sensor. There is also a Practice Mode - to hone the style of wrestling and practice the implementation of special techniques. But perhaps the most interesting mode is the Edge Master Mode. You choose a fighter for yourself and travel with him on the game map, fighting various opponents. This differs from the usual mode of one player in that by beating the enemy. You earn new weapons. But each new type of weapon gives you corresponding additional combat capabilities! (Moreover, there are secret weapons that are especially difficult to obtain, but also especially honorable) In addition to this, there are various types of restrictions. For example, some opponents can be defeated only by throwing them out of the ring; some of them are able to restore their health faster than you beat them. In general, the more you play this game, the more you find interesting details in it. There is no doubt that Soul Blade will really appeal to true connoisseurs of the martial arts genre!
‹
›
Home
View web version