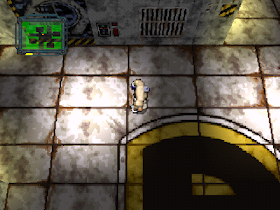 Genre: Action
Perspective: Top-down
Gameplay: Shooter
Published by: Interplay Entertainment Corp.
Developed by: Gremlin Interactive Limited
Released: 1995
Platform: PlayStation (PSX, PS1)
Loaded is a very dynamic game with continuous shooting, requiring fast action and excellent response from the player with fairly convenient controls. You have to take your hero out of the building, which is crammed with enemies to the limit. Naturally, you have to destroy them while shedding seas of blood. Yes, the game is very cruel, which can scare away some potential players from it. The only consolation is that the world in which all this takes place is little reminiscent of reality; because of this, cruelty does not get so much on the nerves. Otherwise, the game is very good. It has many intricate mazes in which it is easy to get lost. Along the way, you will find door keys, health and money. In addition to enemies, you can destroy everything that blocks your path; furniture, walls and other items. After them may remain useful items or money.
During the game, a map of the part of the maze where you are located is available to you. Be sure to use this card, otherwise you can easily skip secret passages and rooms. 3D graphics and sound are great. So, if you are not afraid of blood flows, you will get a lot of pleasure from the game.

The goal of the game is to find a way out to the next level. Collect cards - keys here must be collected in the following order: yellow, green, blue, red. You will find a yellow card in the first room to the right. A green card will be dropped by a guard at the far end of a large room (with a laser gun), and a blue card in the same room opposite, when you shoot them. You will receive a red card before leaving, in the lower room. Keep in mind that behind dilapidated walls covered with cracks, secret rooms are often hidden, crowded with energy sources and other useful things, but there can be enemies. See a suspicious wall - destroy it with fire.

The goal is to find a special personal elevator Commandant. Collect cards - the keys must be in the following order: yellow, red, green, blue. You must pick up the yellow card from the tough guard after you pass a couple of secret rooms with the help of teleporters and pass two rooms with gun installations. A red card is kept by a security guard in a secret room, the course of which you must find by breaking the barricade of boxes (filled, by the way, with useful items). You will receive a green card by breaking through two pair rooms chock-full of security guards. When heading down a long narrow corridor behind a blue card, be especially careful: there are laser turning devices. And at the very entrance to the elevator there are especially dangerous guards, for the victory over which the accumulated weapons and strength will be useful to you (because you took care of this).

The goal is to find the hatch leading to the exit. Cards - keys must be collected in this order: red, blue, green, yellow. Use the first room of this level, where you immediately stock up on weapons and energy sources, as a base, returning to it after extracting each regular card. You will find a new enemy - creepy rats, which you can kill, unfortunately, only at close range. Also pay attention to slow but powerful zombies; some of them need to spend a few shots, while others are regenerated after they are shot, so it’s better to just get away from them. Having found a yellow card, punch a wall under it - in a secret corridor teeming with rats, you will find extra life. But the hardest battle awaits you in the last room before leaving. That's where it's time to launch your favorite bomb!

The goal is to find a teleport that carries to the surface. Cards - keys must be collected in this order: red, green, yellow, blue. There are even more zombies and rats. Red and green cards are at opposite ends of the maze, and in order to capture the yellow card, you must first find the temporary invincibility icon and have time to use it. And on the way to the blue card, you must definitely win the icon of temporary invincibility.

The goal is to steal a car and run. Want to take a break? This level can be considered a respite. Here you do not need to collect cards, you just need to run to the exit - of course, past the guards, who must be carefully removed, but very promptly, and the guard dogs that you will encounter when leaving the premises. Dogs are slower than rats, but stronger and more persistent - taking your track, they will not leave behind until you deal with them. At the end of the level, the first time you encounter a flying robot Hunter’s. You can get into it only when it lands, but you can just run past it to the platform where the car is waiting for you - a shuttle.

The goal is to find 4 cans of gasoline and refuel the car, because the gas tank is empty. It doesn’t matter in what order, but you need to find all four canisters hidden under large stones. Here you have two kinds of new enemies - giant scorpions and blue dogs. They attack in packs, so in case of an environment you need to keep a couple of bombs on hand.

The goal is to find a secret teleport that takes you to the Space Port. To do this, you need to get into the building in the center of a mountainous wasteland, but first collect the cards - the keys in the following order: red, green, blue, yellow. In addition to enemies (scorpions, dogs, rats, zombies) shoot at all barrels and containers in search of useful objects. Cards, extra bombs and other prizes are in shacks scattered around the edges of the wasteland. In the main building there is nothing to collect except cuffs from zombies and rat bites; immediately make your way to the end of the hall, stand between four columns - and you teleport to the next level.

The goal is to find a way to the next level. At this level, it is necessary to conduct heavy, exhausting battles for each room - this is a real “Stalingrad”! Only guards confront you, but they are very dangerous. It’s best to take them by surprise. The most dangerous are the “red shirts”, they must be shot at first. Cards - keys must be collected in the following order: green, blue, red, yellow. On the way to the red card you should find the temporary invincibility icon. The yellow card is hidden in a secret room; You can get into it only with the help of a teleporter located in a cruciform room. And before you exit, you will again encounter a flying robot (remember that you can shoot at it only when it lands).