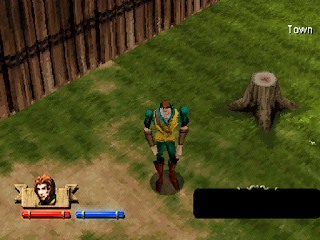 Genre: Role-Playing (RPG)
Perspective: Bird's-eye view
Gameplay: Action RPG
Setting: Fantasy
Published by: Take-Two Interactive Software
Developed by: Delphine Software International
Released: 2001
Platform: PlayStation (PSX, PS1)
Darkstone is a traditional RPG in the spirit of Baldur's Gate and Diablo. Evil once again covers the Earth with its black wing. One of the old magicians who mastered the incredibly powerful Dragon magic decided to conquer the world. There were only a few brave men who decided to challenge evil and descend into the dark dungeons inhabited by monsters, sorcerers and other evil spirits. Help them get to the end and thereby save the world. The game has 8 classes of heroes: warrior, Amazon, mage, sorceress, thief, murderer, monk and priestess. Each hero, like in Diablo, has 4 main parameters: Strength, Dexterity, Magic and Vitality. Very conveniently made a camera for monitoring the hero. By holding the triangle button and pressing the buttons on the crosspiece, you can rotate the camera, zoom in and out. After completing the game, the next level of difficulty will be available (again hello Diablo). Only 5 difficulty levels.
‹
›
Home
View web version