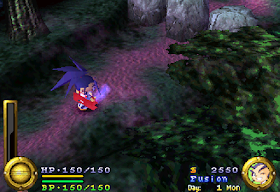 Genre: Action, Role-Playing (RPG)
Perspective: Bird's-eye view
Visual: 2Dscrolling
Artr: Anime / manga
Setting: Fantasy
Published by: Square Electronic Arts L.L.C.
Developed by: Square Co.
Released: 1998
Platform: PlayStation (PSX, PS1)
A rather frivolous plot of the game is based on a children's fairy tale. The main character is a brave fencer Musashi. It’s not very impressive in size and it didn’t reach growth - knee-deep to a normal person. For 80% it consists of blue hair sticking out in all directions and only 20% of flesh and blood. Musashi against his will was extracted from his world by some magical power. His task is to help a suffering civilization. As usual, there is a kidnapped princess, a magic artifact stolen by enemies and other problems in the same style. Most of your journey will follow standard routes along paths and ledges, as in the usual fabulous platform game such as Klonoa - Door To Phantomile. Battles do not take place in the marching system characteristic of role-playing games, but in absolutely real time. Musashi is able to carry out one tricky trick - to seize the abilities of his enemies and further use them for a just cause. You can steal the ability to shoot at robots or the ability to paralyze people from creatures of a different type. When the role-playing part of the game is used, you will need to use options such as putting on armor or changing weapons between levels. The points system in Brave Fencer Musashiden is one of the most unsuccessful. The plot is told with the help of graphics in video clips, where there are no such necessary elements of detail, such as lip movement, etc. In addition, you will hear a lot of all kinds of dull conversations (balls with text appear next to the hero). The very average storyline and the lack of true depth make Brave Fencer Musashiden a game that is not very suitable for experienced tactical players. But for a young inexperienced player, Brave Fencer Musashiden will become a guide to the complex world of role-playing games.
‹
›
Home
View web version