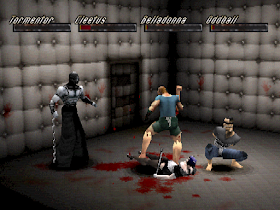 Genre: Action
Perspective: 3rd-person
Gameplay: Fighting
Published by: Virgin Interactive
Developed by: Paradox Development
Released: 1998
Platform: PlayStation (PSX, PS1)
Thrill Kill is a 1998 unpublished fighting video game for Sony PlayStation. While the technical feat of allowing four players to fight simultaneously in the same room was an important selling point, this was overshadowed by the controversy surrounding their depictions of violence and sexual content. Examples of this content include BDSM and also disguises and acts both fetishist, limb dismemberment and violent special movements with suggestive names such as "Bitch Slap", "Swallow This" and "Going Down". He remarkably received the rare "Adults Only" rating (AO; lit. "Adult Only") from the Entertainment Software Rating Board, and was the first video game to receive that rating for its violent content; All previous AO ratings had been granted for sexual content. Because of this, Thrill Kill was finally not published; the almost finished versions of the video game, however, were subsequently hacked and uploaded to the Internet.

Thrill Kill was developed in the late 1990s for the Sony PlayStation by Paradox Development, later Midway Studios - Los Angeles. There was much hype surrounding the game, billed as the new Mortal Kombat, and expectations were high in the gaming community. The publisher was to be Virgin Interactive, but in the summer of 1998 the North American operations of Virgin Interactive were acquired by Electronic Arts as part of their buyout of the developer Westwood Studios, whom Virgin Interactive also owned. This led to EA buying the publishing rights to the game.
By this point Thrill Kill had already finished development in entirety. A few weeks before shipping, the game's release was scrapped by Electronic Arts because they didn't want to "publish such a senselessly violent game", as they felt that it would harm their image. They also stated that they deemed the game so offensive that they would not even attempt to sell the game nor to have it released by another publisher.
Later, former employees that had worked on the game released the full game to the group [email protected] who completed it before releasing it onto the internet along with various beta versions and bootlegs of the game. These flooded the market and were still seen by a large share of its original intended audience nevertheless. All files are still widely available through filesharing, and playable through emulators.

The gameplay consisted of a closed 3D room where up to four adversaries would fight to the death, and would proceed to end each other with Thrill Kills movements as a coup de grace, in the style of Mortal Kombat's fatalities. Each attack made would result in an increase in a character's thirst for blood. Instead of the usual vitality bar, the characters fill in a "killing meter." Once this meter was full and, therefore, the thirst for blood was at its strongest point, a player's character would be electrocuted to give them a superhuman strength that would allow a Thrill Kill movement to brutally kill an adversary, depending on which button was pressed when grabbing the opposing character.

Ten cursed souls have died and descended to Hell. This modern Hell is based on the real world of the deviants of today. The characters are the physical manifestations of their mental illnesses or the evil hidden within their mortal beings. Each character has been a murderer, usually designed based on his illness / inner illness. Marukka, the Goddess of Secrets, is bored of her usual routine and decides that it would be fun to face all the characters against each other in a fight tournament with the prize being reincarnation. Each character is fighting for nothing more than self-preservation and hope to be reborn.

Thrill Kill was developed in the late 1990s for Sony PlayStation by Paradox Development, later Midway Studios - Los Angeles. There was a lot of publicity around this video game, announced as the new Mortal Kombat, and expectations were high in the player community. The publisher was to be Virgin Interactive, but in the third quarter of 1998 Virgin Interactive operations in North America were acquired by Electronic Arts, as part of the purchase of developer Westwood Studios, which also owned Virgin Interactive. This led to EA buying the rights to publish the video game.
At this point, Thrill Kill had already completed the development in its entirety. A few weeks before the release for its premiere, Electronic Arts rejected the launch of the video game because they did not want to "publish such a violent and meaningless game", as they felt it would damage their public image. They also stated that they considered the video game so offensive that they would not even try to sell it or have another publisher publish it.
Later, former employees who had worked on it released the full video game to the T @ STY group that completed it before publishing it on the Internet along with several beta versions and bootlegs of the game. These copies flooded the market and yet they were still seen by a large part of their original audience. All files are still widely available through file sharing and can be played through emulators.
The controversy surrounding the game greatly sparked interest in Thrill Kill in the gamer community, which helped make pirated copies of the game become very common. In its September 2004 edition, Official U.S. PlayStation Magazine cited Thrill Kill as one of the most overrated canceled video games, stating that "he had a lot of hype. But it really stunk too."
The Thrill Kill graphics engine was later used in many other video games. It was used to make Wu-Tang: Shaolin Style (released October 31, 1999 by Activision), a video game based on the Wu-Tang Clan rap group. The Thrill Kill engine was later used in the form of two players for X-Men: Mutant Academy (launched July 11, 2000 by Activision), X-Men: Mutant Academy 2 (released September 17, 2001 by Activision) and Rock 'Em Sock' Em Robots Arena (released on November 30, 2000 by Mattel Interactive).
In 2009, Game Informer ranked Thrill Kill in tenth place on a list of "The Top Ten Games That Almost Were" (lit. "The Ten Games That Almost Were." In 2011, GamePro ranked The Imp as fourteenth in a list of "The 50 Best Fighting Game Characters Ever" The 50 best fighting game characters ever. "

The personal story of each character was released by the creators of the game.