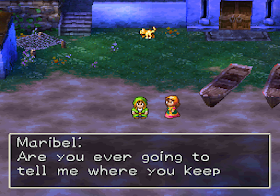 Before swap CD, save state to file, next CD, upload save state file.
Genre: Role-Playing (RPG)
Perspective: Bird's-eye view
Art: Anime / Manga
Pacing: Turn-based
Published by: Enix America Inc.
Developed by: Heart Beat
Released: 2005
Platform: PlayStation (PSX, PS1)
The plot describes the adventures of the Hero and his friends who go on a journey to solve the mysteries of the islands surrounding their homeland. Having found the ancient ruins, they are transferred to the past and at different locations fight the evil reigned there.

The game mechanics, in comparison with the previous parts, has not undergone practically no changes: the battles are still carried out in a step-by-step mode, during the battles the camera shows what is happening in the first person, the previously used character class system is preserved. Locations and a map of the world - for the first time in a series of 3D, while battles are displayed in the form of familiar sprite graphics. The player has the ability to catch monsters, however, unlike Dragon Quest V, they do not take part in battles.
‹
›
Home
View web version