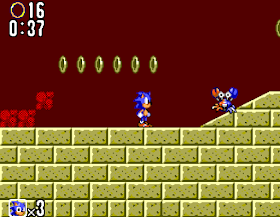 Genre: Action
Perspective: Side view
Visual: 2D scrolling
Gameplay: Platform
Art: Anime / manga
Published by: SEGA of America
Developed by: Aspect Co.
Released: 1992
Platforms: SEGA Master System (MS), SEGA Game Gear (GG), SEGA Genesis / Mega Drive
An incomparable series of games with Sonic! So, the evil guy Robotnik captured your new friend, Tails, and put him in a jail in the Crystal Egg. Sonic must collect all six emeralds and save a comrade. The graphics and gameplay are top notch!
Miles "Tails" Prower - a fox that can not find a place while Sonic is nearby. While still a red-haired little one, Miles dreamed of becoming like Sonic. He loved to run after his hero, twirling both tails, trying to keep up. You were not mistaken - he has two tails, for which he received his nickname "Tails". Sonic was not opposed to running together, but sometimes he accelerated, leaving Tails far behind. Only Miles did not give up. Without noticing it, he learned to twist his tails at such a speed that he could fly, and later spin like Sonic!
But a calm and serene life did not last long, giving way to terrible events. Sonic's friends began to disappear, and instead of them dangerous evil robots appeared on the island. Crazy professor Robotnik again took up the old! And this time he conceived a global catastrophe. He needs more hands to quickly create a machine that can destroy the world. So, without departing from the established tradition, he turns the abducted animals into robots, directing them to build a powerful weapon - Death Egg! In the hands of a crazy professor are factories, factories and entire cities, but so far he has not yet reached the 7 Chaos Emeralds. These magnificent pebbles are fraught with unlimited energy, and with their help Robotnik will be able to carry out his plan. But not everything is so hopeless. The crystals are buried somewhere on the island, so the blue guy with the barbed hairstyle has a chance to get them first!
Six new zones appeared at once in Sonic the Hedgehog 2, full of hidden areas and spirals for overclocking. But these are not the only innovations. Sonic has a new attack - Super Dash, now he doesn’t even need to accelerate, just jump. Bonus screens open previously unseen 3D worlds. You can control Sonic and Tails, which is also great, especially if the second player takes control.
Sonic the Hedgehog 2 is the second game from the Sonic the Hedgehog series. It will debut his faithful assistant Miles "Tails" Prower. This is the first game in which Sonic can turn into Super Sonic by collecting Chaos Emeralds. And according to statistics, this is the best-selling Sonic game for SEGA Mega Drive / Genesis - about 6 million after half a year of sales. Like Sonic The Hedgehog earlier, the second part was often sold bundled with the console.
The Japanese version of the game, released a month after the American one, has several improvements. The clouds in it move regardless of the movement of Sonic (Green Hill Zone). Added two water graphic effects to the Labyrinth Zone. And at all levels the number of background layers has been increased, which gives a more realistic scrolling of the screen. The PAL version of the game is slower than NTSC, only 89% of the real one. Both the game and the music are slow.
‹
›
Home
View web version