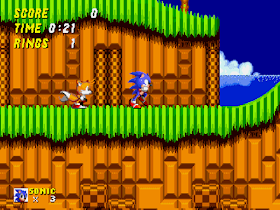 Genre: Action
Perspective: Side view
Visual: 2D scrolling
Gameplay: Platform
Art: Anime / Manga
Published by: SEGA of America
Developed by: Sega Technical Institute, Sonic Team
Released: 1992
Platform: SEGA Genesis / Mega Drive
The second part of the hedgehog adventure. And without that, the cool schedule was made even steeper. Sense remained the same - to collect the rings and to wet all. The plot, too, has not changed: the evil Eggman has done evil deeds and he needs to be given again on the head. But this does not mean that the game has remained the same - new levels, enemies and opportunities. Let there be Sonic!

In order to get into the bonus level, jump into the sprocket of stars that It is formed after activation of the continuation place in the form of a column with an asterisk.
After you defeat the boss at the level of "Wing Fortress", do not jump down immediately, but jump over the abyss and take an extra life.

Go to Options and listen (in 10-12 seconds) in sequence the following melodies (using the C button): 19, 65, 9 and 17. Now press start. In the main menu, holding A, press start - you will be given the opportunity to select any level.
If you want to play Super Hedgehog, go to the level selection menu (see step 1) and listen to the melodies 4, 1, 2, 6.
To activate the "Debug Mode", listen to the melodies 1, 9, 9, 2, 1, 1, 2, 4.
To select a level from the "Debug Mode" menu, highlight its name and, holding down the A button, press start.
In order to be able to edit the game, listen to the melody menu 1, 9, 9, 2, 1, 1, 2, 4 in the level selection menu. Now select the level, press the A button and, without releasing it, click on start. Now using the button B you can edit, button A allows you to select an item, C - to fix it in the selected place.
During the cutscene, type: up + up + up + down + down + down + up. There should be a beep. All inscriptions with the name of the fox in the game will be replaced by a different name.

Control of it remains the same "control of any button" (all three make it jump). Nevertheless, the creators managed to introduce another movement: press and hold the "Down" button on the remote and quickly press any other button to make Sonic rotate on place, then release all the buttons on the remote and -you will see how Sonic rushes forward in his SUPER ATTACK. It's a very good way to climb steep hills and pave the way through the corpses of enemies.
All the rules of the first series of "Sonic" refer to "Sonic 2". If you collect 100 Rings, you will receive a RESERVE LIFE. If you have at least one RING, when you are hit by an enemy, you will save life (although the ring, of course, lose) Try to grab the Ring again to protect yourself. When you have at least one ring, you do not face loss of life.
The PREMIUM STAGE was changed, but it became better than even and so worthy of all praise such a level in the previous game. This time, you will see Sonic and Tails running on the pipe, collecting the Rings and dodging the Bombs. You can practice at this stage in two player mode, but you will need an assistant to control the Tails. To get to the bonus stage, you need to collect 50 Rings, then touch INDICATIVE POST. Around it, a ring of stars is formed, in which you must jump to get to the premium level. If you collect the required number of Rings by the end of the stage, you will receive one of seven EMERALDs. To become a Super Sonic, you need to collect all seven Emeralds. It's difficult to control Super Sonic, but he moves faster, jumps higher and is unbeatable for enemies and rush (but drowns in the water and can be crushed). It also slides above the ground when it reaches a sufficient speed.
Try to jump on the walls to find the PATTERN PASSES. There are also such walls that Sonic can pierce, if he properly runs up. These walls, as a rule, differ slightly from the others.
‹
›
Home
View web version