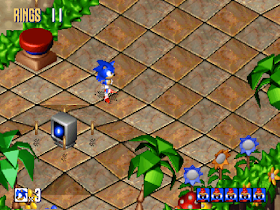 Genre: Action
Perspective: Bird's-eye view
Visual: Isometric
Gameplay: Arcade
Published by: SEGA of America
Developed by: Travellers Tales (UK) Ltd.
Released: 1996
Platforms: SEGA Saturn, SEGA Genesis / Mega Drive
The game is made in isometric graphics, so the game creates a feeling of a certain 3D. In the story, the hedgehog Sonic is sent to the island in an alternative dimension, where Dr. Robotnik is already the boss. The villain uses birds, called Flick, to create their robots and search for Chaos Emeralds. The main character wants to release Flick and not let Robotnik get to Emeralds.
Sonic 3D was originally developed exclusively for the Sega Mega Drive / Genesis console, but due to the cancellation of the Sonic X-treme on the Sega Saturn, a game with significant improvements was also published for this platform; Later, the project was reprinted many times in gaming services and was published in collections. However, all versions received mixed reviews. Observers praised the music and videos, and cited the management and use of isometric graphics as flaws.

Sonic 3D Blast, like all previous games in the Sonic the Hedgehog series, belongs to the platformer genre. The game uses isometric graphics, which creates the effect of 3D. In the story of the game, Dr. Robotnik discovers Flicky birds that live on an island from an alternate dimension. Learning that they can travel with large rings, the villain turned the birds into his robots to use to facilitate the search for Chaos Emeralds. Sonic the hedgehog visits the island and sees the base of the doctor there. He decides to release Flick and not let Robotnik get to Emeralds.
In total, Sonic 3D has eight levels (zones), seven of which ("Green Grove", "Rusty Ruin", "Spring Stadium", "Diamond Dust", "Volcano Valley", "Gene Gadget", "Panic Puppet") are divided on three acts, and the eighth ("Final Fight") represents the final battle with Dr. Robotnik at its base. The names of the zones are alliterative, that is, both words in them begin with the same letter. In most of these zones, Sonic destroys robots in order to free up the flick. After collecting five flick they need to throw through a large ring-teleport. After that, the main character dives through the hatch to the next stage of the level, where he will again have to collect birds and send to the next big ring. There are four types of flick: blue birds fly around a large ring, pink ones are located in the most distant places of the levels, green ones try to avoid Sonic, and red ones jump in a limited space, but very high. On the way, the hedgehog can also collect rings. They serve as protection from enemies, and when collecting 100 pieces, an extra life is given. If damage is caused to the character, he will lose all the rings, and Flick will fly away in different directions. The character may die in the absence of rings and re-attack by the enemy. The levels also scatter bonuses that are stored in special monitors, for example, extra life or acceleration. On the last, third act of each zone, there is a battle with the boss, Dr. Robotnik.
If a player has collected 50 or more rings, he can get into the "Special Stage" - a special level, after which Sonic gets one of the seven Chaos Emeralds. You can pass the "Special Stage" only once per zone. To do this, at the level you need to find Tails or Nackles and give them the collected rings. In the version for the Sega Mega Drive / Genesis, Sonic goes to the "Special Stage" bridge, and on Saturn and Windows - a special pipe, made in the style of special stages Sonic the Hedgehog 2. Despite the differences in these levels, the goal is the same: to get a stone, you need to collect a certain number of rings, without running into bombs. Collecting all seven Emeralds on the seven "Special Stage" will allow the player to go through the final battle with Robotnik and see the “good” ending. You can get to the “Special Stage” after collecting all the Emeralds; in this case, an extra life is given for his passing.
‹
›
Home
View web version