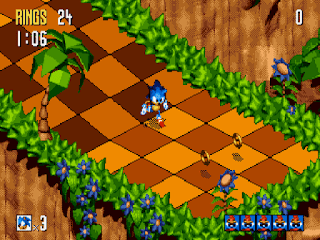 Genre: Action
Perspective: Bird's-eye view
Visual: Isometric
Gameplay: Arcade
Published by: SEGA of America
Developed by: Travellers Tales (UK) Ltd.
Released: 1996
Platforms: SEGA Genesis / Mega Drive, SEGA Saturn
The action in the game Sonic 3D Blast takes place on the remote island of Mobius - Flicky Island, inhabited by small birds. Flickers have magical abilities and can easily travel between dimensions, creating large rings. Unfortunately, there are 7 Crystals of Chaos on the Island of Flick and an indefatigable villain - the crazy professor Robotnik has caught the poor birds so that they can help him in search of a source of unlimited energy. Reactive Hedgehog Sonic just thought of visiting his friends, birds, and, stumbling upon robots, begins to destroy all plans of Dr. Ivo. To succeed, you need to release all the birds.
Released 2 years after the original Sonic series, the game 3D Blast is the first attempt to transfer Sonic into the 3D universe. Sonic 3D Blast in technical terms is the most heaped game in the series, but the gameplay does not hold out. Graphically, the game is almost the most attractive in all SEGA Genesis libraries. 3D landscapes look lush, clean and properly detailed. The voluminous characters, drawn in high resolution, are smoothly animated. Seven game zones do not seem alien to fans of the series.
The whole gameplay is reduced to running around in different locations, collecting rings and various bonuses and jumping on robots in order to free the birds. Released birds should be taken to a large ring, through which Sonic teleports to the next level. Knuckles and Tails are also in the game. If you find them - get a bunch of rings or an invitation to the bonus level. By the way, the bonus levels have also changed. Now Sonic runs along a bridge stretched over a lava field.
Despite all the innovative stuffing, Sonic 3D Blast is not so interesting. There is no previous speed. The player is forced to move slowly and accurately, trying to round the obstacles. Jump on the heads of robots, too, is not so simple, the control pumps. The idea of combining levels is not the most successful - you can easily fall to the previous level, and time is ticking. There is no way to save the game. And Sonic's new spinning turn turns him into a ballerina!

Interesting facts about the game