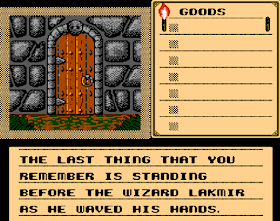 Genre: Adventure
Perspective: 1st-person
Gameplay: Puzzle elements
Setting: Fantasy
Published by: Kemco/Seika
Developed by: ICOM Simulations
Released: 1989
Platforms: Nintendo (NES), Nintendo 64 (N64)
An adventure game similar to DejaVu (one and the same engine). This is a kind of very much improved version of the text adventure game. The text of the messages remains, but nothing is necessary to write yourself. Teams are selected by the cursor, he also selects the direction of movement and he can also poke into objects on the small screen to obtain information on them or in order to take them. This game is a classic fantasy adventure game.

How to bridge the abyss

To safely cross the Chasm, use the Potion, which is described as "incredibly light". Thus, the rope bridge below you will not break.

How to Overcome the Shadow Wraith

To defeat the Spirit, which awaits you right behind the Stone Bridge, you will need a special Torch, which you will find at an early stage of the game. On your menu, it is listed separately from other torches. Light the Torch (it will turn white) and throw it into the Spirit.

How to beat the Troll in the Fire Room

A Troll in a Fire Room will charge you. Do not pay! The first time you see him, just hit him with your Spear. The second time you need to get past him, use the Humana spell. This will allow you to sneak past.

How to beat the Hellhound

To defeat the Hellhound, you will need Holy Water. Look for this water in a cache hidden under a stone in the laboratory unit.

How to cross the lake

You will need to cross the Lake to get the Key from the Skeleton. To safely cross the Lake, freeze the water in it using the Crystal Orb. If you don’t have a Crystal Ball, go to the Pedestal Room and place the White Gem in the hole. Gnus can be found in a bag hidden behind a waterfall. Do not forget, passing the Lake, to take with you the White Orb. You can extract it from the ice by touching it with the Torch. The ball is still useful to you.

How to find the Scepter

You will find the scepter in the room with the Coffins. Open the Coffin on the right containing the Mummy, and then set fire to the Mummy. After it burns out. The scepter is yours.

Flute in the Fountain

When you take out the Flute from the Fountain, put a Gauntlet on your hand. To find the Mitten, go to the Cyclops Courtyard. The gauntlet is in the Well's Bucket.
‹
›
Home
View web version