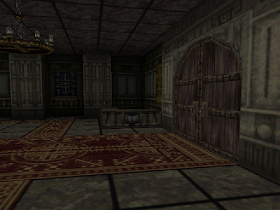 Genre: Adventure
Perspective: 1st-person
Gameplay: Puzzle elements
Setting: Fantasy
Published by: Kemco U.S.A.
Developed by: TNS Co.
Released: 1999
Platforms: Nintendo 64 (N64), Nintendo (NES)
The player travels the world of the game with a first-person view, as in a 3D shooter. The movement of the character occurs in real time when the player presses the buttons responsible for the movement. The review of the game world also occurs in real time - when the player clicks on the buttons responsible for the review. The review is possible in any direction (left / right and up / down). Game space is divided into Locations. They are loaded as soon as the player hits them. Only one location can be loaded at a time (for example, Castle Living Room, Cemetery or Shop). There are both indoor and outdoor locations.
The actions that are performed during the game are a purely quest process of exploring the world, finding and using objects and dialogs with characters. There are several puzzles of medium difficulty. Not all items in the game world will come in handy as a result. Much of what gets into inventory is completely useless.
The use of inventory items on objects of the game world is accompanied by animation - if a player smashes an object with a pickaxe, the game really shows how a pickaxe hits it; if a player opens the door, it really opens with a distinctive sound.
The inventory is divided into two sections. In the first are objects, in the second - books and notes. Some of these papers are important for passing, others simply reveal the history and atmosphere of the world.
In one of the very first locations of the game, you can get a map, although it is optional for passing.
During the game, the main character may die. Usually after death, a short text is given with its description, which is superimposed on the picture with a graphic image of death. This feature of the gameplay was also characteristic of the first game of the Shadowgate series, made in the late 1980s on the MacVenture engine.

The beginning of the plot

The world is spinning and time is moving forward. The memory and fear of evil that once passed through this earth have been erased. The guards, always ready for it to return, have gone. Heroes of past centuries are no more. The only one who fulfilled the great prophecy and destroyed the evil, now lives only in the stories of the bards. Peace and prosperity have returned. Yes, peace, prosperity and carelessness. The world revolves and time moves forward and evil again makes itself felt. And now there is no great hero who could resist him ...
Many years ago, this road saw warriors and kings galloping along its tape. Many years ago, this road was a line of life leading through the continent. Many years ago, this road was convenient and safe for citizens and for slaves. But that was many years ago ...
Now it is a road that runs through a high plain near the Pryratny Mountains - the place where the legendary Shadowgate Castle stands, which has become the den of robbers and thieves. Those unfortunate people who had to travel along this road know how great the danger is, but many are willing to take risks for the sake of profitable trade and commerce. Therefore, bandits are constantly robbing passing caravans.
On this day, another unlucky caravan fell victim to thieves, but now the fate of the young hobbit and the whole world will forever change.
The main character is a hobbit named Del Cottonwood (Eng. Del Cottonwood) (c Eng. - Cottonwood - Cotton tree). He travels with a caravan of merchants. Rogues from Shadowgate Castle smash a caravan.
Fiery arrows pierce the satellites of the Cause. Only he remains alive.
The hobbit is taken prisoner, and a huge disgusting jailer throws him into prison. In the future, Cases expects nothing but torture and bullying. Run away !! In his cell, he finds a hidden hatch leading to the sewer. An ordinary person might not squeeze into such a narrow tunnel, but for the Hobbit it is not difficult.
Shadowgate Castle was a magical university in the past. The robbers inhabit only the surroundings of the castle, because the doors to the inner rooms are closed and sealed by ancient magic spells. You can’t get there. There has not been a single living creature for many centuries. The hobbit finds a walled-up hatch leading into the pantry in the sewers, smashes it with a pickaxe and ends up in an ancient castle. Things await ghosts, dark secrets, and the ancient sadness of silent walls.
‹
›
Home
View web version