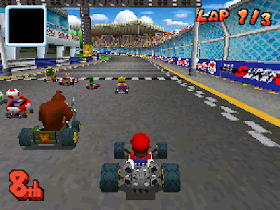 Genre: Racing / driving
Perspective: Behind view
Gameplay: Arcade, Vehicle simulator
Vehicular: Automobile, Track racing
Setting: Fantasy
Published by: Nintendo of America Inc.
Developed by: Nintendo EAD
Released: 2005
Platforms: Nintendo DS (NDS), Game Boy Advance (GBA), Nintendo 64 (N64), Super Nintendo (SNES)
The cult characters - Mario, Luigi, Princess Peach, Donkey Kong, Bowser - got into cars of the most incredible kind and are preparing to sweep each other off the track. Join us - cars behave differently on the road, obstacles move along the tracks and bonuses are scattered! Opponents can be pushed into the abyss and into boiling lava, and bonuses become a formidable weapon - take out the leader with a flying tortoise shell, feed the driver a mushroom and speed up! Become rainbow and sweep away everything in its path! On the top screen is a race, on the bottom is a radar: watch out for opponents! Mario Kart DS is more than racing: fight in arenas, butt giant bosses with a typewriter, inflate balls over it with a microphone! Mario Kart DS is a fabulous multiplayer: up to eight people wirelessly on one cartridge and four of them racing online! Mario Kart DS is a unique passion and dynamism: artificial skid gives acceleration, and the winner can never be predicted.