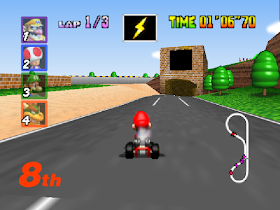 Genre: Racing / Driving
Perspective: Behind view
Gameplay: Arcade, Vehicle Simulator
Vehicular: Automobile, Track Racing
Published by Nintendo of America
Developed by: Nintendo EAD
Released: 1997
Platforms: Nintendo 64 (N64), Nintendo DS (NDS), Game Boy Advance (GBA), Super Nintendo (SNES)
The second part of the Mario Kart series is a racing game. The environments are 3D, while karts, items etc. have been realized as sprites. The game can be played with up to four players. All 16 routes are varied. On one the player is made to slide, in a desert one is hit by the train, in Toads Turnpike one overruns vehicles not involved in the race and in the jungle one jumps over a steamer. In addition, there are many more features. Well-known locations such as Bowser's Castle and Princess Toadstool's Super Mario 64 Palace are also featured. There are also four Battle routes, one in the form of a donut with lava in the middle, one with four different colored plateaus, a four-storey platform and finally a space-like design on a platform. You can only drive the Mario Grand Prix in pairs, with 3 and 4 players, the Nintendo 64 would likely have had performance problems.

In single-player mode, the user plays against up to seven computer-controlled opponents. The player has the choice between the following game modes:

Two players also have a Grand Prix race available. With three and four players not more. In addition, there are the following multiplayer competition modes:

Mario Kart 64 is controlled by the Nintendo 64 Controller. The following applies here:
A=The A button increases the speed. When you press R + A, you drift.
B=With the B-button you brake the kart, at standstill you drive backwards.
R=You drift with the A button. Other function: You jump up slightly, better turn in turns.
Z=Take the item with the Z button and insert it.
L=There you can make the music louder or softer. (3 volume differences)
C=With the C-button you can see how fast you drive. You also have an overview of all the drivers. (Since only the first 4 places are shown at the start).
‹
›
Home
View web version