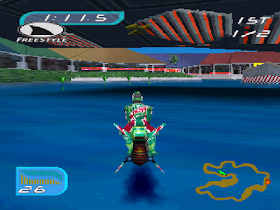 Genre: Action, Racing / driving
Perspective: 1st-person, Behind view
Vehicular: Naval / watercraft
Gameplay: Arcade
Setting: Sci-fi / futuristic
Published by: 989 Studios
Developed by: Pacific Coast Power & Light
Released: 2000
Platform: PlayStation (PSX, PS1)
In the Jet Moto series, the fourth part was planned, but it did not work out, it did not grow together. In development, the game ran into various difficulties: either the marketing department rolled up scandals, or the changed director got up on the wrong foot. When the game was almost ready, in marketing they decided that the levels were too narrow and they urgently needed to be expanded. And this caused big problems with the bots, which were sharpened under narrow tracks. In general, after 2 years of development, the game was turned off in almost finished condition. The work of the developers was not in vain and today we can check out what could be a failed Jet Moto 2124.
‹
›
Home
View web version