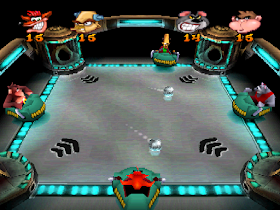 Genre: Action
Perspective: 3rd-person
Gameplay: Mini-games
Published by: Sony Computer Entertainment America
Developed by: Cerny Games, Eurocom Developments Ltd
Released: 2000
Platform: PlayStation (PSX, PS1)
It belongs to the genre of so-called mini-games (such as those in the Mario Party series). The game is the fifth installment of the Crash Bandicoot saga, although it has no direct relationship with the events of Crash. It is composed of a series of mini-games in which the different characters have to be able to eliminate the others or get the maximum score. It is organized in the typical phases of this saga, the Warp Room phases, each with a final boss that the player has to face after overcoming the previous mini-games.

In an unknown part of the cosmic atmosphere, Aku Aku argued with his twin brother Uka Uka about what is stronger: good or evil. Decree Decree believes that he is the strongest, and that evil can surely defeat. Aku Aku decides to resolve this dispute once and for all. Decree Decree is about to attack his brother, but Aku Aku stops him, recalling that the Ancients would not have suffered violence between them. Then Uka Uka agrees to hold a competition - his players against the players Aku Aku. Aku Aku agrees and teleports two players to himself: Crash and Coco. At this time, Uka decree teleports his players to himself: Doctors Neo Cortex, Nitrus Brio, Tiger Tiny, Koala Kong, Dingodile and Rilla Roo. Aku Aku notices that his brother has too many players, and demands to give him two. Uka Uka gives him Tiny Tiger and Dingodile, and the game begins.

The end of the game depends on which player the game was played by - one of the players Aku Aku (light side) or Uka Uka (dark side).
If the player has a bright side: Uka Uka is furious trying to find out what tricks Aku Aku used to defeat him. Aku Aku replies that he did not use any fraud, that he knew in advance that Uku Uk was trying to realize his plan to steal crystals. While Uka Uka rips off the anger on his players, Aku Aku hides the crystals in a stone box, saying that they are safe there. Decree Decree requires that which belongs to him, and he receives it - punishment for disturbing the crystals. Uka Uka falls into a whirlwind and is thrown into space.
If the player is on the dark side: a storm begins in the Universe, announcing that Uka has decreed. He tells Aku Aku that he had a secret plan - to steal all the crystals and take on their energy. Aku Aku is surprised at how naive it was to think that good always conquers evil by itself. Now that Uka Uka has become strong, Aku Aku orders Crash and Coco to run away and escape. The mighty Decree Decree loudly announces that now there is nowhere to run and nowhere to hide.
If there is a draw: (in multiplayer mode, one participant played for the bright side and the other for the dark) Aku Aku and Uka Uka decide that their players must meet face to face. Players will be offered a mini-game where they will fight among themselves only together, as in the "Jungle Bash". After each round, "Good wins" or "Evil wins" are declared, depending on who won the round. After three rounds played, the ending will be shown, again depending on whether the player on the light or dark side won.

The game takes place in five warp rooms, on each floor there are a different number of portals leading to a mini-game or a battle with the boss. The mini-game involves four players. You can play alone against the three players controlled by the computer (on the principle of "each for himself"), or you can play together against two computer players (on the principle of "two for two"). Passing mini-games, the player collects trophies (cups), then gems, crystals, gold and platinum relics.

Getting rewards for completing

Neutral characters (most often are no more than a background level)