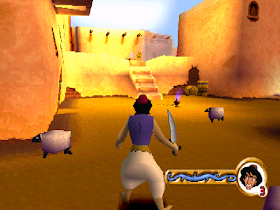 Genre: Action
Perspective: 3rd-person
Setting: Fantasy, Middle East
Published by: Sony Computer Entertainment America
Developed by: Argonaut Games PLC
Released: 2001
Platform: PlayStation (PSX, PS1)
The new version of the game is not just a continuation of the original incarnation, as it was transferred from the classic 2D animation of Disney to the 3D world, which is rather unexpected. The list of actions that Aladdin can take has been completely preserved. These actions include jumping, bouncing, running, sliding, throwing, swinging on the ropes (and other things!), Climbing, crouching movement and (rather strange) surfing on the Ginny board. All these actions suggest creating more opportunities for the player to copy Aladdin's movements. The plot is mainly based on a traditional game, but it also includes exploring areas to find objects, intense battles and solving puzzles (which is not so difficult). Since this game is mainly based on the body of the version, it contains all the real heroes and places from the movie. The list of heroes will be unusual for those who are unfamiliar with this story (hardly any) and includes Aladdin, Abu, Jasmine, Sultan, Iago, Ginny and Jafar. The game will also reveal Jafar's evil sister, Nazira.
The story is based on the fact that the palace of the Sultan is captured by Nazira. She then drives away the Sultan and Jasmine to avenge the death of her brother. The game locations are different for each level, guaranteeing no plot repetitions. At least six game environments are available for research (they can be hidden or opened as you progress in the game). Each location is designed to meet the objectives of this level; thus, levels with a lot of battles have a lot of open space, while levels of exploration are large and confusing, like a maze. Collecting items plays a big role in the game, as collecting gems will be required to access premium levels, and tokens are needed to buy items from Gin (although I have always believed that gins give things for free. It seems that our Gin is a pretty miser). These bonus levels are completely different from the main game, to give the player a unique experience when they are achieved, and Gene tokens are changed for additional lives and continuations (and, possibly, a surfboard). This game is pretty good to become a classic.
‹
›
Home
View web version