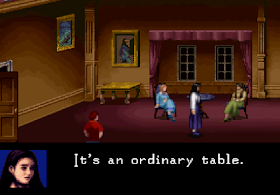 Genre: Adventure
Perspective: Side view
Gameplay: Puzzle elements
Narrative: Horror
Published by: Kaga Tech
Developed by: Human Entertainment
Released: 1997
Platforms: PlayStation (PSX, PS1), Super Nintendo (SNES)
The game is a Survival Horror, made using 2D graphics. The player controls Jennifer and gives her specific commands, for example, checking various environmental objects. The game interface is similar to the adventure games of the 1990s and simplified for a better game on the gamepad. The game has many dangerous situations that can lead to the death of the protagonist. Most tasks come down to finding keys and other things needed to complete. Throughout the game, Jennifer often chases the Scissorman (aka Bobby, aka Killer With Scissors). In the event of an attack, the player must often press a certain key (“panic button”) to avoid death. Clock Tower was originally published on the SNES console in 1995 in Japan and developed by Human Entertainment. In 1997, the game was ported to the PlayStation and renamed to Clock Tower: The First Fear. Subsequently, ports were also released for WonderSwan and Windows 95, both in 1999. The game is the first in a series of games of the same name. Outside of Japan, the game was not released.
There is confusion with the names of the games as they are released; here is the order of release of the games:
The game has several endings. You can go through it in different ways, the plot is non-linear. In fact, you can literally reach one of the endings in five to seven minutes. Good graphics, excellent stereo sound effects, all this is in place, but the main thing in this game is the plot. You have to come up with this! The control, which is a computer point’n’click system, may seem a little inconvenient. It’s unusual to control the cursor without a mouse, but it’s a trifle compared to everything else.
Jennifer Simpson is the main character of the game, which, along with her friends from an orphanage (Laura, Anne and Lotta), was recently adopted in the story by Mr. Barrows, a wealthy man who lives in a mansion known as Clock Tower. Jennifer and her friends are invited there by Lady Mary. While in the mansion, Jennifer understands that the Barrows are far from an ordinary family.