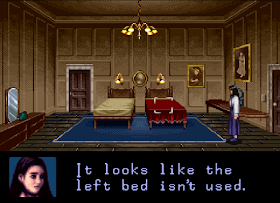 Genre: Adventure
Perspective: Side view
Gameplay: Puzzle elements
Narrative: Horror
Published by: Human Entertainment
Developed by: Human Entertainment
Released: 1995
Platforms: Super Nintendo (SNES), PlayStation (PSX, PS1)
The only game on this console in the genre of interactive horror. According to the plot of this game, you will be given the role of a fifteen-year-old girl, Jennifer Simpson, an orphan from a women's shelter-monastery (so do not be surprised at her rather strange along with the time period of the mid-nineties). Her and three other girls decide to shelter the owner of one large mansion in Norway. Who would have thought that this was just a deception, a pretext for killing innocent orphans, and the "caring" teacher would lead them to this fate. The murderer is Bobby, better known as the Scissors Man, and the cave under the Clock Tower is his bloody refuge. He also has Den, a renegade brother, but he will not be able to see much of him, for this game has many endings that have a bad end for the most part. You have to perform a number of rather complicated logical actions to escape from this hell, well, on occasion, to take with you one of the surviving girlfriends. Because of the huge amount of violence and violence, this game could not be uncensored in the west. Fortunately there is a fan translation in the archive with the game.

Clock Tower has a number of endings, which depend on what choice the player made in certain situations throughout the game. The endings are from A to H, H is the worst and A is the best, and there is also a special ending S, which is higher than A. The endings A, B, and C are considered canonical, that is, the Clock Tower sequel (Clock Tower 2) is logically compatible with any of them.

This ending is unique and the hardest to get. Initially, it is not marked at all in the ending sheet. It almost coincides with ending A, however, Jennifer's girlfriend, instead of being pushed out of the tower, simply lies on the floor unconscious. At this time, an enraged flock of ravens, one of which Jennifer had previously freed from the cage, throws Mary off the tower. Then, Jennifer joins her surviving girlfriend. (If Jennifer saw Ann's death, then Laura would survive, and vice versa. Lott could not be saved.) However, this ending is not canonical. Two conditions necessary for her - the release of the crow, and the presence of Jennifer's father, Walter, in a secret room.

This ending will open if Jennifer meets Simon Barrows in the barn, and if one of her friends survives. After Bobby flies to meet his death, the surviving girlfriend runs to Jennifer. Their reunion abruptly ends when Mary comes out and pushes Jennifer's girlfriend over the edge into the Clock Tower gears. Mary tries to stab Jennifer, but Jennifer pushes her over the edge and Mary dies. However, if before that the player freed the raven from the cage, then the raven will beat Mary with its beak until it breaks off the tower, almost like in the end of S.

Knowing that all her friends were dead, Jennifer takes the elevator to the third floor. Shortly before the elevator stops, Bobby tries to break into it through the ventilation hole in the ceiling. Jennifer flees the stairs to the top of the tower, and activates the bells of the clock tower with the help of switches, while Bobby is so confused that he falls right from the top of the tower towards his alleged death. Mary appears, in hysteria over the death of her two children, and tries to strangle Jennifer. Jennifer pushes Mary into the generator, where she is electrocuted. Jennifer is the only survivor.

Inside the elevator, Jennifer presses a second floor button and meets Mary in the hallway. Jennifer, who already saw her father’s corpse, talks to Mary before she rushes at her with a knife. Then Merry calls for help Bobby. Jennifer runs away from Mary and climbs the stairs to climb the clock tower. But Mary grabs Jennifer by the leg. Jennifer shakes off Mary's grip, which breaks off the stairs and crashes to death. At the top of the clock tower, Jennifer meets Bobby, eager for revenge for her brother and mother, but Jennifer includes bells. The bell fight disorientates Bobby, so he breaks down from the tower down towards his death. Jennifer is the only survivor.

Inside the elevator, Jennifer presses a button on the second floor. In the hallway she meets Mary. Jennifer, who did not see her father’s corpse, speaks with Mary, and Mary reassures her with the words “Now you are safe.” Jennifer runs to Mary, and Mary stabs her in the chest with a knife. In her last breath, Jennifer asks, “For what?” Mary stands silently with an ominous smirk. There is an alternative ending D, see below.

Inside the elevator, Jennifer presses a button on the third floor. The elevator suddenly stops. Bobby breaks into him through the vent above. Jennifer screams. The screen goes into darkness.

If Jennifer has not seen Lotta’s death, she will continue the game as usual until the elevator episode begins. After entering the elevator, the doors close (while Jennifer is not visible). Scream Jennifer. Cutting sounds. Blood flows from under the doors of the elevator.

Seeing the death of his two friends, Jennifer leaves. She successfully escapes from the mansion and returns to the shelter. A short accompanying text in the final splash screen tells the player that three days later, Jennifer was found dead in her room. In this ending, the cause of Jennifer's death is unclear; The two most common theories are that either she was tracked down and killed by someone from the Barrows family, or committed suicide, unable to accept the loss of her friends and her inability to save them.

This ending is easiest to achieve, and it is considered the “worst.” Jennifer runs to the old garage. At first she doubts, knowing that her friends remained in the mansion, but after repeating the attempt, she gives up and tries to escape, breaking through the wall of the barn. In the final splash screen, a reflection of the rising scissors appears in the front mirror. Shocked Jennifer screams. The screen goes into darkness.
In addition, there are two endings that can be obtained due to a software malfunction in the game, due to which Jennifer does not see the death of Ann and Laura. The first is identical to the endings H and G, except that a receding machine just appears on the screen - as a result, the ending gets the rank D. The second occurs if the player fulfills all the necessary conditions for the ending S, but it turns out to be identical to the ending F.
‹
›
Home
View web version