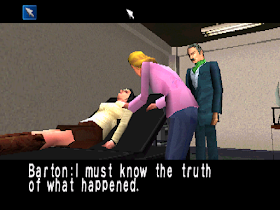 Genre: Adventure
Perspective: 3rd-person
Gameplay: Puzzle elements, Survival horror
Published by: ASCII Entertainment Software
Developed by: Human Entertainment
Released: 1997
Platform: PlayStation (PSX, PS1)
The second game of the series (despite the name of the game, this is the second part of the series, because the first part is published only in Japan as the Clock Tower - The First Fear) is a direct sequel to the original Clock Tower and continues the fan favorite story about the main surviving after the events of the first part of the game the heroine Jennifer Simpson, as well as the demonic killer maniac, depriving his victims of life with giant scissors.
Now the plot takes a new turn and becomes even more interesting, resembling a magnificent detective. Throughout the game, you will have to wonder who the killer is, little by little realizing the answer through reflection on the tiny tips that the developers skillfully enter into the game world. In addition, the psychological side of the plot has deepened significantly, in which substantial attention is now paid to the dark sides of the human psyche.
More than a year ago, the serial killer, the legendary Scissorman, was killed - then one of the victims managed to outwit the maniac and end him once and for all. But now, a year later, the bloody trail has resumed ... Has the nightmare killer returned from the grave?
An original mix of adventure, horror and a detective story, Clock Tower will provide you with the opportunity to unravel the case of the murders that strike you with cruelty - but be careful ... You can become the next target of the Scissorman. You will have to solve puzzles and tasks as quickly as possible, because an insidious killer can lie in wait for you anywhere. Nowhere can you feel safe ... Be prepared to use every opportunity to stop the maniac, try to delay him and - run away!