Scooby-Doo and the Cyber Chase (PS1) 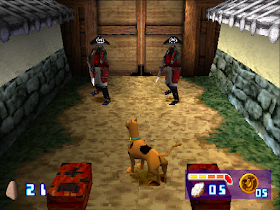 Genre: Action
Perspective: Behind view
Gameplay: Platform
Published by: THQ Inc.
Developed by: ART Co.
Released: 2001
Platform: PlayStation (PSX, PS1)
Scooby-Doo and his friends - Shaggy, Velma, Daphne and Fred - came to visit Eric, the creator of a video game based on their adventures. Friends found out that someone had released a dangerous computer virus from cyber world. Friends try to catch him, but by the will of the creator of the Virus, they themselves get inside the video game. Pursuing the Virus through ten difficult levels, the company first lands on the moon, and then travels from the prehistoric past to the present and encounters a horde of virtual monsters from its most famous stories, which their virtual counterparts help them defeat.
‹
›
Home
View web version