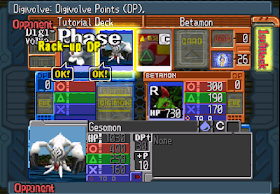 Genre: Strategy / Tactics
Art: Anime / Manga
Gameplay: Cards / Tiles
Published by: Bandai America
Developed by: BEC Co.
Released: 2001
Platform: PlayStation (PSX, PS1)
A card game based on the universe of Digimons (Digital Monsters). The player has about 30 cards with various Digimons, as well as support cards and special Digivolution cards. The Digivolution concept is the key in each of the Digimon series and Digimon Digital Card Battle is no exception, its essence is that the player starts the game as a newcomer and finishes the game in the Ultimate rank, as well as in the development of Digimons by crossing different species to obtain a more powerful character . For the development of Digimons, during the game you have to sacrifice some cards when the player reaches the required number of points (Digivolution Point, DP) and Digivolution becomes possible, the player decides which card to donate, after which he gets a new, stronger Digimon (usually ) When you start the game three cards are available to you - Veemon, Hawkmon and Armadillomon, then there will be more of them, during the game the selected Digimons will gain experience, become stronger, strengthen Digivolve (armor), receive Digi-parts, increase attack power and so on.