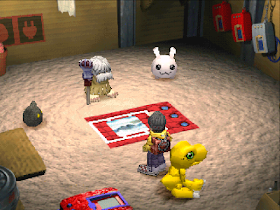 Genre: Action, Strategy / Tactics
Perspective: 1st-person
Published by: Bandai America
Developed by: Flying Tiger Development
Released: 2000
Platform: PlayStation (PSX, PS1)
You get a randomly chosen Digimon, to whom you give a name. With it, you begin the journey, the purpose of which is to unite the inhabitants of Digimon Island. Some of these inhabitants mysteriously lost their ability to speak, so that hostile forces managed to destroy their society. There are many elements of role-playing and adventure games. The idea of ​​the game is to explore the world and meet with other Digimons. There will be puzzles to solve, objects to collect. Most of the action will take place in a training camp outside the enemy capital located on the island - the suddenly famous City of Tricksters. There you can improve the skills of your monster with the help of passive training exercises. For example, you can increase its strength if you hit it with a giant boxing glove several times. Or to develop his ability to attack, if he has enough urine to strike at a stump located in the Green Gym.
You will also have to pamper your pet so that he is happy, make sure that he has plenty of food and time for sleep, to encourage or punish depending on his behavior and do not forget about his natural needs (in the sense that Digimony go to the toilet). Sometimes he will be able to take care of himself, going to the woods when he feels that it is necessary.
The development team managed to convey a sense of fluidity of time and space. Twilight really gradually descends, and in the afternoon your little monster will demand three meals a day from you, so you will have to take care to satisfy his desires.
‹
›
Home
View web version