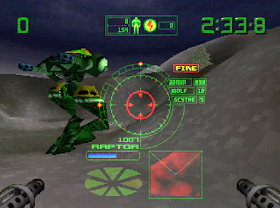 Genre: Action
Perspective: 1st-person
Gameplay: Arcade, Shooter
Vehicular: Mecha / Giant Robot
Setting: Sci-Fi / Futuristic
Published by: Psygnosis Limited
Developed by: Psygnosis Limited
Released: 1996
Platform: PlayStation (PSX, PS1)
Humanity is on the verge of total annihilation. Power belongs to robots that create energy zones on earth in which all life perishes. But then the crazy Ivan (it's you) jumps inside the robot and starts a merciless war against these robots. Why crazy? We don’t know. Apparently, it means that a normal person would not risk his life, and Ivan is a man of a wide soul - he can! With bombs, missiles and other improvised means you destroy everyone and everything in order to then, ultimately, destroy the final Boss at each level and blow up the generator. Prisoners run out of the destroyed robots, which you must save - they are brothers with you in mind.
Although the game has rather boring landscapes, explosions and other pyrotechnic effects look impressive. Despite the simple plot and some frivolity of the game, it turned out quite fascinating.
Interesting: the game Krazy Ivan, although it has nothing to do with underwater war, was named after the American name for the unexpected maneuvering technique used by Soviet submariners during the Cold War to "inspect" the "dead zone" with the sonar created by the noise of their own screws , behind the stern of the boat. This reception was very dangerous, as it could lead to a collision with the enemy submarine that was following in this very "dead zone".
‹
›
Home
View web version