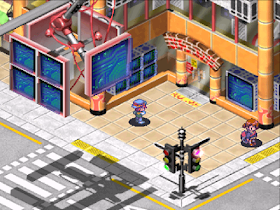 Genre: Role-Playing (RPG)
Perspective: 3rd-person
Art: Anime / Manga
Setting: Sci-Fi / Futuristic
Published by: Bandai America
Developed by: BEC Co., Boom
Released: 2002
Platform: PlayStation (PSX, PS1)
Once, three friends - Junior, Teddy and Ivy decided to play the online game Digimon, but at some point something went wrong and all three fall into the World of "Digital Mosnter", DigiMon. The owners of the game servers, MAGAMI Corporation, assured that the problem will be fixed soon, but is it so? The main character of the game, Junior, has to unravel the secrets of the Digimon and MAGAMI Corporation. Unlike the previous part in Digimon World 3, the player gets more freedom and wide places that he can explore (in Digimon World 2 you spent the lion's share of the time in the dungeons occasionally creeping out into a schematically made city). The game has become more like a classic RPG, rather than a Dungeon Crawling game like before. Graphics, colors and music are also significantly improved, the game has even more dialogs and there is a storyline. Everything else remains as before - a turn-based battle system, character development (including Digivolution) and more. At the start, you have one Digimon available from the three offered, but completing quests you can get up to nine Digital Monsters (plus one bonus) at a time.