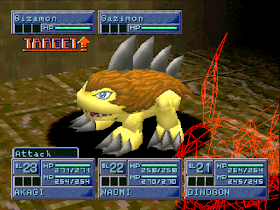 Genre: Role-Playing (RPG)
Perspective: 3rd-person
Published by: Bandai Co.
Developed by: BEC Co.
Released: 2001
Platform: PlayStation (PSX, PS1)
Digimon World 2 is a role-playing game with Dungeon Crawling-style gameplay, in other words, your journeys will take place in underground labyrinths and you will only breathe air when you return to the city. But there is something to do in the city too - chat with the members of your clan, fight in the arena with the rival Digimons, make shopping buying all sorts of things useful for health and strength, as well as toys for Digimons, because they are like children who are greedy for gifts, but they can also say "Fuuuu" if your gift is nothing to them. You can also upgrade the vehicle on which you roam through the mazes for long battery life or armor power and all that is required in battle and wandering. And of course, you can cross Monsters and develop their abilities, which subsequently opens the way for them to Evolution, after which their appearance and power of attacks, and the size of Digimon, will radically change.
You are waiting for more than 30 underground quests, a large number of cute Monsters that are made in 3D. Fights are not imposed on you, that is, they are not randomly generated, you see the enemy in the face (face?) And only your desire for close contact will provoke an attack, but here you have a choice, you can make friends with the Digital Monster by offering him a gift in the form of toys. Despite the freedom of choice, you still have to fight, because Digi will get experience only in battle, and the faster the better, because further the enemies will be cooler and more insidious. The battles take place in a step-by-step mode, you hit them, then they and you as usual, everything is familiar, including the ability to remove from the battlefield (what happens does not work). The defeated monsters are reborn through the decay of bits of digital information and reappear from the egg (digital I suppose), the monster with whom you managed to make friends joins your ranks.
The game has nice graphics (rendezvous backgrounds and 3D monsters performed excellently), good sound, an intuitive interface, and a large field for creative experiments, and Digi itself will please both you and your children. I remember how my every day coming from school I was interested in how many new Digimons evolved and what came of it.
‹
›
Home
View web version