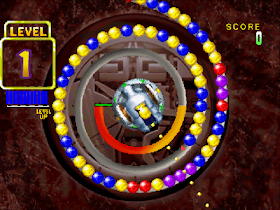 Genre: Puzzle
Perspective: Top-down
Visual: Fixed / Flip-screen
Pacing: Real-Time
Gameplay: Arcade, Tile Matching Puzzle
Published by: Hasbro Interactive
Developed by: Mitchell Corporation
Released: 1999
Platform: PlayStation (PSX, PS1)
This is a puzzle game in which the player must arrange the colored balls in the desired sequence so that they disappear from the screen. Visually, the game is similar to the well-known casual game Zuma, as well as the equally popular Luxor, with the only difference being that the balls move in a spiral to the center of the screen, which should not be allowed, because when they reach the limit, the game will end. They should all be eliminated before they reach the finish line. The game has three modes - Panic, Stage and Vs. In the first, the game proceeds more lively, the complexity is constantly growing, you have to hold out as long as possible and score the maximum number of points. In the second mode, you successively go through the stages of the game, from simple to complex, the best result is when you clear the screen in less time and the number of shots. The third mode is the two-player mode, the one who first cleans his screen wins.
‹
›
Home
View web version