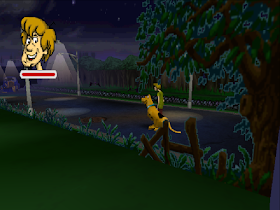 Genre: Action
Perspective: 3rd-person
Gameplay: Puzzle elements
Narrative: Detective / Mystery
Published by: THQ Inc.
Developed by: TerraGlyph Interactive Studios, L.P.
Released: 2000
Platform: Nintendo 64 (N64)
The game follows Mystery Inc. Investigates the crime ring, which manages the mysterious ghoul king through four levels. The first three levels retell three episodes of Scooby-Doo, Where Are You! While the fourth is the original mystery. Control the player Shaggy and Scooby, as they find clues and snares to complete the level. Velma, Fred and Daphne help them.
When Shaggy is scared enough times, he leaves the zone and the player must restart. Fright can come from simple things, such as opening a case or the complex dangers of such a moving display of a mummy dinosaur player hitting a player. "Courage" can be restored by searching for food to eat in the cafeteria or in Scooby snacks, lying on the ground.
Each room, and sometimes different sections of the same room, are presented as still images of the camera that the player moves through. A familiarity with the TV show helps the player, because in one case, the player must hide inside a 2D painting in order to avoid the villain.
The villains of the Black Knight, Snow Ghost, medicine man, and the game exclusive Ghoul King.
‹
›
Home
View web version