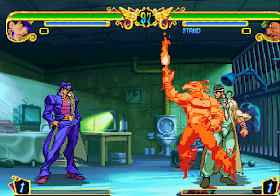 Genre: Action
Perspective: Side view
Art: Anime / Manga
Gameplay: Arcade, Fighting
Published by: Capcom Entertainment
Developed by: Capcom Co.
Released: 2000
Platforms: PlayStation (PSX, PS1), Arcade Machine
Here, in addition to the famous hero of the Japanese comic book JoJo, you will meet vampire hunters and numerous gangsters who will fight you in fierce battles. The game has 17 fighters, among which you will meet, perhaps, your friends. Managing the game is typical of the street fighting game genre, and the one who played these games will not encounter any problems. However, you will definitely notice that the character’s attacking arsenal is generally small. But there is one special feature, the so-called Stand Attack. By executing this attack, you call up essentially the second "I am" of each fighter, and this shadow can perform special moves and combinations. In addition, in the Story Mode there are two cute new items: shooting shooting range in the first-person perspective and R-Type Shooter. As usual, and this is typical for Capcom, the graphics are at a decent level, the music and especially the sound effects are just perfect. In general, the game will bring pleasure to fans of Street Fighter.
‹
›
Home
View web version