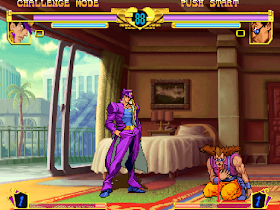 Genre: Action
Perspective: Side view
Gameplay: Arcade, Fighting
Art: Anime / Manga
Published by: Capcom Co.
Developed by: Capcom Co.
Released: 1998
Platforms: Arcade Machine, PlayStation (PSX, PS1)
The game is a fighting game, and its characters are aged in an anime style, with bright and detailed visual details, branded for the game company Capcom; Each character in the game has a stand with unique abilities, and each character uses a different strategy during the battle. Although many elements of game mechanics were taken from previous games of the company Capcom. Hirohiko Araki, the author of the original manga, acted as a consultant with the developers, and also invented the abilities for the character Meidler, who appeared in the original manga for a short time, without demonstrating abilities.
According to the plot of the game, the main character Jotaro Kujo discovers in himself the ability to manage the stand and from the grandfather Joseph Jostar learns that the reason for this was the awakening of Dio Brando, the old enemy of the family. And if he is not killed, then Jotaro's mother, Holly may die. Jetaro and his team travel to the Middle East in search of Dio, entering the alternate battle with different opponents.
The gameplay is a classic fighting game where two opponents engage each other in battle, using different attacks, techniques, special moves and if the opponent's life scale is empty, the player wins or if the combat time, which is 95 seconds, expires, who has more life left. The fight is divided into three rounds. Feature of this game in comparison with other fighting games are stands, which can use opponents in combat. Each stand has a unique supernatural ability and increases the strength of attacks against the enemy several times. Some stands can act independently of the player's actions. On the other hand, the use of the stand depletes the vital forces of its carrier, also striking the stand, the carrier suffers. Therefore, the use of the stand is fraught with risks. Also, the time of using the stand is limited by the number of strokes.
Initially, the game allowed to freely choose any character available in the game and the opponent for the battle. However, in the improved version of PlayStation, a number of improvements have been added, multiplayer and the introduction of mini-games such as car chase or gambling and story development mode, in which the game itself decides which opponents the player will fight, following the manga story , incidentally performing mini-games.
‹
›
Home
View web version