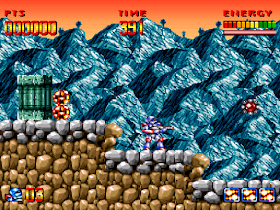 Genre: Action
Perspective: Side view
Visual: 2D scrolling
Gameplay: Platform, Shooter
Setting: Sci-Fi / Futuristic
Published by: Seika Corporation
Developed by: Factor 5 GmbH
Released: 1993
Platforms: Super Nintendo (SNES), Nintendo (NES)
It is practically the Turrican port for the Nintendo platform with graphics and sound slightly inferior to the Amiga version, and with the slightly modified and generally shorter levels. Conversion for SNES is by the Factor 5 group, already author of  Turrican 2, and is a completely new video game.

The planet Katakis is invaded by the forces of darkness only Bren McGuire, a heavily armed super-soldier is able to solve the problem, wearing his Turrican battle suit and starting the mission to save the planet.

The potential of the video game is the same as that of its predecessors, namely the exploration in search of extra lives necessary to complete the video game, the never boring action, the music and the effects and the spectacular weapons. Bosses can also be found at mid-level and not necessarily at the end, some of which are gigantic.
‹
›
Home
View web version