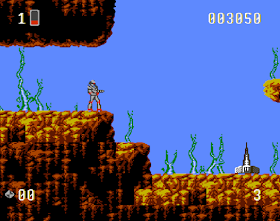 Genre: Action
Perspective: Side view
Gameplay: Platform, Shooter
Visual: 2D scrolling
Published by: Imagineer Co.
Developed by: Rainbow Arts Software GmbH
Released: 1993
Platforms: Nintendo (NES), Super Nintendo (SNES)
You are Bren McGuire, in the mission of the United forces to save the planets and you need to save the peaceful planet Katakis from the Machine - the source of evil in the universe. The only weapon on your side is the modern Turrican assault suit. Equipped with several weapons, including the incredible Freeze-Beam, which temporarily immobilizes almost any enemy, the Turrican assault suit gives one person the strength of the entire army.
Like other games in this series, Super Turrican for NES is a platform scroller where players explore large levels filled with objects and secret areas of enemies. There are three different types of upgradable weapons available: multiple, laser and ricochet. Holding the fire button activates the rotating laser, which is useful for detecting hidden energy capsules.
Despite the fact that the game has the same name as SNES, Super Turrican for NES is based on Turrican and Turrican II. Although some levels are very similar to those found in Turrican I and II (with minor changes in the layout and enemy types), many levels are completely new.
‹
›
Home
View web version