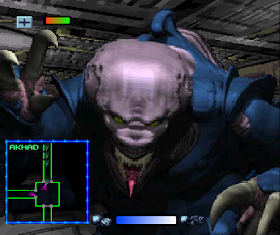 Genre: Action, Strategy / Tactics
Perspective: 1st-person, Top-down
Setting: Sci-Fi / Futuristic
Published by: Electronic Arts
Developed by: Key Game
Released: 1996
Platforms: PlayStation (PSX, PS1), 3DO Interactive Multiplayer
Space Hulk - these are huge spaceships designed by the Imperium in the Dark Era of Technology and created for the colonization of the planets. Such a ship could carry on board several million settlers, equipment, equipment and everything necessary for the settlement of the planet. After the Era of Discord, the secret of the production of these ships was lost.
Sent thousands of years ago, these ships were lost forever in the warp streams. A ship that has been swallowed by the warp can be lost in it forever or go outside, into ordinary space, for many thousands of light years from the point of destination. Thus, the Space Hulk can remain in the Warp for hundreds of years, and passengers imprisoned inside the ship are doomed to a slow and painful death from starvation or fall into insanity. But the most terrible fate awaits those who were on ships with a good life support system - they may suffer even longer. In the warp, the combination of several buildings into one especially huge one, ranging in size from a small satellite to a whole planet ...
Sometimes Space Hulk come out of the Warp into ordinary space, drifting aimlessly across the expanses of space. However, leaving the warp, the ship is not released. After a certain period of time it is sucked back in again, and the endless journey continues.
The wanderer is of great interest to the Imperium: for example, the wrecks of these ships may contain particles of information about lost technologies. Therefore, in order to search for archives, relics and ancient artifacts, the Imperium sends the Space Marines elite troops to the discovered ship. It is the thirst to find valuable archives that stops the Imperium from simply destroying the Wanderer.
In Space Hulk: Vengeance of the Blood Angels you have to play for the Chapter of the Space Marine called the Blood Angels. The ship of the Blood Angels docks to the cosmic wanderer, who emerged from the Warp near one of the inhabited planets of the Imperium. However, it turned out that this gigantic ship seemed lifeless only at first glance. Inside the steel womb they slept in anticipation of their hour of the hordes of Genestealers.
Henrads represent a race of aliens from another galaxy, the Tyranids, whose goal is to destroy the Imperium from the inside. They secretly penetrate the planet and infect the inhabitants with their genes, as a result of which they produce hybrids - half humans - half-caged foals. These creatures play the role of scouts and light Beacons on the planets to lure their Fleet-Hive Tyranids. Therefore, you need to investigate the discovered ancient ship and clean it from the Genestealers.
However, this is not so easy, even for veterans of the Space Marine, the best fighters in the Universe, in heavy power armor of the "Terminator" class. Enemies always have an overwhelming numerical advantage, attacking in large crowds. In addition, they obey the commands of the Higher Intelligence of the Tyranids, which coordinates their actions. In other words, the enemy is cunning, extremely dangerous and very numerous!
By genre the game is a tactical first-person shooter. The player commands a detachment of Space Marines numbering up to ten people, while you are free to switch between members of the squad, personally taking over the guidance of one or another space martial artist. The game has two modes: the first is a real-time battle and the second is the giving of orders to the men in pause mode lasting 60 seconds. In the pause mode, the player is free to plan the actions of the terminators subordinate to him, giving the necessary orders. The difficulty is that if you do not have time to give the necessary, and most importantly - tactically correct orders in the allotted time, the fate of Space Marines will be unenviable!
In the main game menu, the player sees two doors. The left door opens a list of single missions, where you are given an equipped detachment of Space Marines and combat missions that are very diverse: to find an artifact, to reach a given point, or simply to survive ... Here you can also complete training missions. The right door leads to the main campaign, in which the Blood Angels must clear the Space Hulk from the Genorads. You begin to play as an ordinary space marines brother, performing the tasks set by the command. As you progress, you are promoted to the rank and you command a whole branch of terminators, while your experience and experience of subordinates grows.
Terminators are equipped with both heavy long-range assault weapons and a special set of weapons for close combat. Some types of weapons, such as a flamethrower, can sometimes fail and explode, destroying everyone and burying hopes for the success of the mission ...
The game has an extreme degree of atmospheric! The rumble of the mechanisms working in the womb of the ship, the ominous hissing of Genorad, dark winding corridors, which hide death at every angle, radar going off from the number of targets, negotiations between partners on the radio.