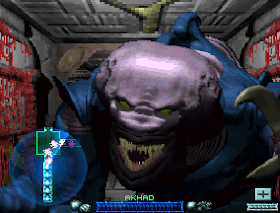 Genre: Action, Strategy / Tactics
Perspective: 1st-person, Top-down
Setting: Sci-Fi / Futuristic
Published by: Electronic Arts
Developed by: Key Game
Released: 1995
Platforms: 3DO Interactive Multiplayer, PlayStation (PSX, PS1)
Space Hulk: Vengeance of the Blood Angels is the second part of the Space Hulk series of games dedicated to the Warhammer 40,000 universe. This time it was released for the system 3DO Interactive Multiplayer in 1995. In the yard already 41 millennium, the technology has so stepped forward that the journey through the vast universe and the expanses of space already takes, not too much time. Thus, in space there are many orphaned spacecraft, the so-called Space Wanderers. These ships are inhabited by non-friendly races of aliens of the troglodytes of the Givers. Having seized the ship, they direct it to the nearest inhabited planet. After that they go into hibernation until a certain moment. But behind all these ships are being watched, and when they approach the planet, an assault ship is sent to them for a sweep. In general, as in the first part of the game, our task will be to detach the terminator from the Space Wanderer from the Genocraps. But there will be a variety of missions like: find a special object C.A.T., burn out the fire of the room or just get to the exit, shooting back from the enemy.
Now from the strategic part of the game there was only a small part - a tactical screen, a small mode in which we can ask what will be done to our group. Now the game is completely 3D and we play FPS with a first-person view. Now you can play only for the Blood Angels. This is probably one of the best games for the Panasonic 3DO game console, you need to play it. Fans of the abundance of blood game should especially like it, since the blood from the dead enemies remains everywhere.

The main thing is to protect your team. Before executing the task, pay attention to the nearest points of the entrance to the geysilier and to the key corridors. Then you will correctly map the line of defense.
Use the map and always look for ways to expand the zone affected by the weapons of your team. For example, you can use two terminators, firing an important item from two opposite sides to create a deadly crossfire.
For terminators, walls and large rooms with multiple entrances are most dangerous, allowing the enemy to attack from different directions, using numerical superiority. If possible, avoid large spaces and intersections if you have not provided their cover.
Of course, the terminator can be killed. Standing for the deceased must be at a sufficient distance to make a maneuver.
Retreating into the corridor, you force the growers to line up, and they will be able to attack you only one at a time, which is much safer than situations where the attackers are "in line." Try to observe the distance of four squares so that you have enough time to orient yourself.
When you give your fighters the order to travel a long distance, indicate more points, so that they go exactly according to the route you have planned. Otherwise, they will choose the path themselves, and maybe it will not suit you. After giving the order, do not forget to go to the tactical operations screen. It will allow you to monitor your team and in time to detect the approach of the enemy, not yet taken by the scanner. Valuable information can also be extracted from radio conversations. Hearing that someone from your team is killed, you can "put" the game "on a pause" and decide how to compensate for the loss.
Success equally depends on the thoughtfulness of long-term plans, and on the ability to respond quickly to unforeseen situations. Typically, the genistiles attack the largest group of terminators. Therefore, always keep a large group in reserve, and move the smaller group to key positions - it will be less attacked.
At first, the "attention" tasks seem interesting and uncomplicated. However, try to gain more experience, as the subsequent exhausting tasks will be very difficult, if you do not pass the introductory training. When deciding on a particular task, do not follow the instructions blindly. Real officers are interested in the mission as a whole and often turn to the tactical operations screen to correct the course of the mission. The most important thing in any campaign is the protection of your units. Veterans are more reliable and can cover the young. The more missions your soldiers perform, survived, the more experience they will accumulate. Having reached really difficult missions, your team will become a formidable force. Remember that when you move to the next mission, the game automatically remembers your position and you can not return the dead.
When performing some of the most complex missions one or two terminators will have to be sacrificed. They are left in key points of the labyrinth. Usually, if they are not needed to complete a mission, it's a machine gunner and a machine gunner (Flamer and Bolter). They will restrain the growers and distract attention, allowing the rest of the team to complete the assignment and leave. 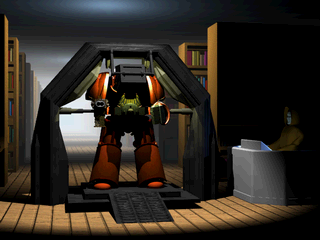 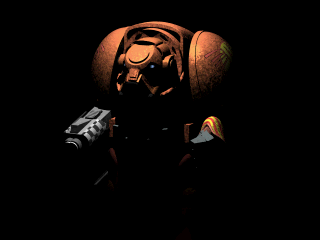