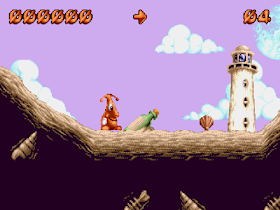 Genre: Action
Perspective: Side view
Gameplay: Arcade, Platform, Puzzle elements
Visual: 2D scrolling
Published by: Psygnosis Limited
Developed by: Travellers Tales (UK) Ltd.
Released: 1993
Platforms: SEGA Genesis / Mega Drive, SEGA CD / Mega-CD
Puggsy is a rather funny and peculiar creature that has finally gathered to its home! And now he has a task: he needs to find his own spaceship, and that, unfortunately, has gone somewhere. As soon as he got a little comfortable, the locals got interested in for some reason. Now he has to travel through different levels, with the study of various subjects. Some will help find a way out of the level, others - to fight off enemies. There are energizing ones, there are those that can make an object invisible. Or Pugsi himself will not be attacked in this case.
Very good in Puggsy for Sega implemented the question of physics. For example, if a character picks up a rubber ball, with which he hits the wall with force, he will start jumping, springing, bouncing and jumping for a while. That which can float in the real world will, accordingly, float, and that which is heavier than water will drown. Objects do not linger on the slopes, and slide down, in a word, here is a very realistic implementation. This walker has its own secret levels that you can open if you know the codes. You can also always start the game again from any place, if you are not satisfied with your passing.