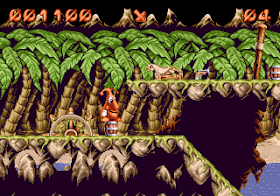 Genre: Action
Perspective: Side view
Gameplay: Arcade, Platform, Puzzle-solving
Visual: 2D scrolling
Published by: Psygnosis Limited
Developed by: Travellers Tales
Released: 1993
Platforms: SEGA CD / Mega-CD, SEGA Genesis / Mega Drive
Funny game Puggsy is a mixture of platforming and logic games, to complete the level you need to get to the exit, before solving various small puzzles and puzzles. You play as a cute alien who made an emergency landing on the planet in connection with the attack of his ship by space pirates. But his adventures are just beginning, as his ship was stolen by the islanders. Now you have to help Puggsy get home. Unique in the game is the clever physics of objects that you rarely see in games for 16-bit consoles. The version of the game for Sega CD is slightly different from the version of Puggsy for Sega MegaDrive / Genesis. Also there are videos in it.
Unlock all levels password - 600 276 007 314 325 663 037 356 576.
‹
›
Home
View web version