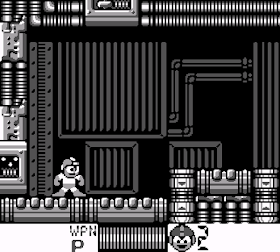 Genre: Action
Perspective: Side view
Art: Anime / Manga
Gameplay: Shooter
Setting: Sci-Fi / Futuristic
Published by: Capcom U.S.A.
Developed by: Minakuchi Engineering Co.
Released: 1994
Platforms: Game Boy (GB), Nintendo (NES)
Mega Man and Roll are walking along a grass field, where they meet a Stradroid robot on their way called Terra, with whom Mega Man is trying to fight, but in vain. From the weapons of Terra Mega Man loses consciousness. Later, he wakes up in Dr. Light’s laboratory, where Dr. Light himself equips the Mega-Arm with a Mega Arm weapon, with which he can effectively deal with enemies. After passing the first four Stardroids (Mercury, Neptune, Mars and Venus), the player is shown a cutscene where he meets Terra. In the middle level, the Mega Man destroys the Dark Moon, a robot similar to Yellow Devil from Mega Man 1. Then the Mega Man flies to the Rush Spaceship and is about to destroy the remaining five robots (Pluto, Uranus, Jupiter, Saturn and Terra).
After the destruction of the next five bosses, Mega Man will have to fly on the Rush Spaceship, where he destroys the Skull Blazer, which blocks the entrance to the spacecraft of Dr. Wiley. After the destruction of this boss, the player will have to rematch with the robots Enker, Quint, Punk, Ballade, as well as with the Stroids (with the exception of Terra). After Mega Man destroys Wiley's car, the final SunStar robot appears, which Mega Man also destroys, damaging his arm. Sunstar convinces Mega Man to go to the repair to Dr. Light's lab, but Sunstar refused, believing that he should stay there and Mega Man to continue his intelligence. The final scene shows us Mega Mana as he lands in the Rush Spaceship and watches Dr. Wiley's spacecraft explode. Arriving on the ground, Mega Man sees the Wiley capsule crashing and Wiley himself asks for pardon from the Mega Man. Wiley runs away, and Mega Man is catching up with him.