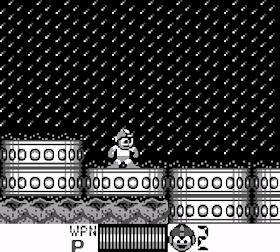 Genre: Action
Perspective: Side view
Art: Anime / Manga
Gameplay: Shooter
Setting: Sci-Fi / Futuristic
Published by: Capcom U.S.A.
Developed by: Minakuchi Engineering Co.
Released: 1993
Platforms: Game Boy, Nintendo (NES)
After passing the first four bosses (Toad Man, Bright Man, Pharaoh Man and Ring Man) a small intro is shown to the player, in which you can see the Mega Man in front of the castle. In the middle level, Mega Man destroys the satellite gun and Ballad, created by Dr. Wiley. Then Mega Man teleports and is going to destroy the remaining four robots.
After the destruction of the next four bosses Mega Man will have to fight again with the Ballad. After the destruction of this boss, the player will have to complete a level, at the end of which he will meet with the final boss, Dr. Wiley. After the victory over Dr. Wiley, the cutscene is shown to the player - Dr. Wiley falls to his knees and asks him for forgiveness. Mega Man leaves the destroyed spacecraft, where near the exit meets the Ballad, who sacrifices himself to save Mega Man. Mega Man is sucked into outer space and he flies away on Rush, watching the spacecraft explode. After the final cut-scene are captions.

After the destruction of the first four robots, collecting the letters "B", "E", "A" and "T", you get a birdie "Beat", which attacks the enemies on the screen near the Mega Man. Rush Jet Mega Man receives after defeating the robot Charge Man, the subject allows the Rush to turn into a flat surface and move the Mega Man through the air.
‹
›
Home
View web version