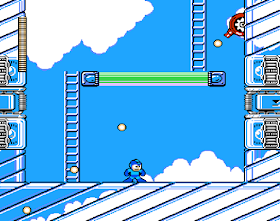 Genre: Action
Perspective: Side view
Visual: 2D scrolling
Art: Anime / Manga
Gameplay: Platform, Shooter
Setting: Sci-Fi / Futuristic
Published by: Capcom U.S.A.
Developed by: Capcom Co.
Released: 1992
Platforms: Nintendo (NES), Game Boy (GB)
As in the previous parts of the game, the player will have to play for the humanoid robot Mega Man. Mega Man is equipped with a blaster that charges by pressing the attack button, this one does more damage.
The player will have to defeat the robots designed by Dr. Wiley. For the victory over each boss Mega Man gets a special weapon.

This time Mega Man is challenged by the mysterious scientist Dr. Cossack, who created eight powerful combat robots to capture the world. Later it turns out that Dr. Cossack is not a villain. He was forced to challenge Mega Man, as Dr. Wiley kidnapped his daughter Kalinka, who Protomain rescued from his captivity during the Mega Man battle with Dr. Cossack. After that, Mega Man enters the battle with Wiley.