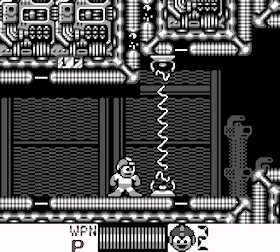 Genre: Action
Perspective: Side view
Visual: 2D scrolling
Gameplay: Arcade, Platform
Setting: Sci-Fi / Futuristic
Published by: Capcom U.S.A.
Developed by: Minakuchi Engineering Co.
Released: 1992
Platforms: Game Boy, Nintendo (NES)
After passing through the first four bosses (Snake Man, Gemini Man, Shadow Man, Spark Man), a small intro is shown to the player, in which the Mega Man can be seen in front of the castle. In the middle level, Mega Man destroys a quadratic one-eyed robot. Then Mega Man teleports and is going to destroy the remaining four robots.
After the destruction of the next four bosses Mega Man will have to fight with Punk'om - another boss. After the destruction of this boss, the player will have to complete a level, at the end of which he will meet with the final boss, Dr. Wiley. After defeating Dr. Wiley, the player is shown a splash screen - Dr. Wiley falls on his knees and asks Mega Man for forgiveness, but the Mega Man refuses to forgive him, with the result that Wiley canned in a capsule and lowers the lock into the ground and flies off to the UFO.