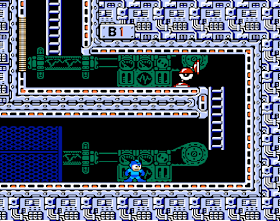 After being defeated twice by Mega man, Dr. Wiley reconsidered his views and re-united with Dr. Light. Their joint project, a giant robot called "Gamma" was supposed to be a new defender of the peaceful life of people. Wiley created eight new robot masters who were sent to various planets to search for a source of energy for Gamma, but during the dispatch they stopped obeying and went crazy. Upon learning of this, Dr. Light sent the Mega man to eliminate a new threat in the face of these robots. However, now Mega man received a robot robot named Rush (Rush), able to transform into a different transport. A new character appears in the game - Protoman, the first robot of Dr. Light and Mega man's older brother, who fled from his creator. He appears on 4 levels of the game and tests Mega man's strength in fights. Later it turns out that the loss of control over the robots was only a distracting ploy of Wiley, and the doctor himself kidnapped Gammu to capture the world. In addition, he reconstructed eight robot-masters from the last part. Now Mega man must once again stop Dr. Wiley, who is obsessed with taking over the world.

The player will control the robot character named Mega Man. Compared with the previous parts, Mega Man has a new opportunity - sliding, allowing him to dodge enemy shots and move faster through the level. The game has increased the number of bosses - eight new and eight old, reconstructed. However, Mega Man receives new weapons only after the destruction of one of the new bosses. Also, the game has a new type of bonuses, which is of a random nature.

For the implementation of auxiliary activities, Dr. Light created a cyborg dog Rush for Mega Man. Rush can improve his abilities as they are received from Dr. Light. Rush has the following abilities: see above.
‹
›
Home
View web version