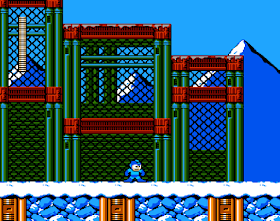 Genre: Action
Perspective: Side view
Visual: 2D scrolling
Art: Anime / Manga
Gameplay: Platform, Shooter
Setting: Sci-Fi / Futuristic
Published by: Nintendo of America Inc.
Developed by: Capcom Co.
Released: 1994
Platform: Nintendo (NES)
Mega Man defeated Dr. Wiley again and returned peace and tranquility to people. To prevent his further attempts to take over the world, the World Alliance of Robotics was created. Thanks to financial support from the mystical Mr. X, scientists and robotics from around the world managed to create eight most powerful combat robots to protect humanity. The organization decided to hold a championship between robots to test their combat skills. But before he began, Mr. X announced to the world that in fact he was driving Dr. Wiley. Now he decided to take matters into his own hands and programmed robots to take over the world. Now Mega Man has to eliminate the new threat. After the battle with Mr. X, Mega Man learns that he is Dr. Wiley, and his disguise is another trick, and Mega Man must once again defeat him.