The Hunt for Red October (NES) 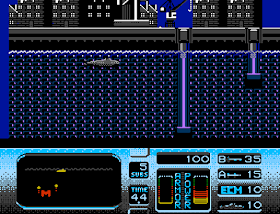 Genre: Action
Perspective: Side view
Visual: 2D scrolling
Gameplay: Arcade, Shooter
Vehicular: Naval / Watercraft
Published by: Hi-Tech Expressions
Developed by: Beam Software Pty
Released: 1990
Platforms: Nintendo (NES), Super Nintendo (SNES)
The sensational movie "The Hunt for Red October" with Sean Connery in the lead role was at one time recognized as anti-Soviet. And, like all the forbidden, this made it even more popular. That had a positive impact on the game, which we represent to you.
Commander Ramius controls the submarine of extraordinary power. This ship, thanks to the imagination of the authors of the game, worthy of the pen of Jules Verne himself, the creator of the Nautilus, could be the pride of the fleet of any naval power. Their choice, however, focused on the Soviet Union, and the boat was awarded the honorary title "Red October". What about the USA? What they will remain without such a super-weapon? Authors easily solve this problem. Supported by the crew, Ramius conceived to snitch the "Red October" from the USSR and begin a breakthrough in the direction of the American shores. And since you decided to play this game, the implementation of the ideas of the submarine commander becomes your personal business.
I hope you do not expect the Soviet command to look with indifference as the wealth of the republic is floating, in the literal sense of the word, abroad? Right. So get ready for hard fights on the way to the Statue of Liberty. Very serious naval and air forces will be thrown against you.
But the "Red October" is not some ordinary submarine, but you (Ramius) are an experienced captain. Chances are, dare! Use in battle the flexibility of control and all the power of the ship’s armament and resolutely break through to the west. If successful, you will gain what is considered to be freedom in everyday life, and "Red October" is probably a new name.

⇦ / ⇨ - the movement of the submarine in a horizontal position;
↑ / ↓ - ascent - immersion;
B - rocket launch;
A - start torpedoes;
SELECT - the inclusion of a protective field.