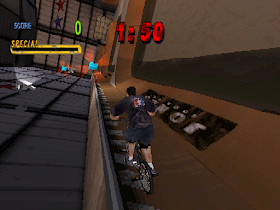 The goal of Mat Hoffman's BMX Pro is to achieve, combine and succeed various tricks on the handlebars of a BMX type bike, as well as to achieve various goals such as harvesting objects. The player can embody eight different professional BMX riders, including Mat Hoffman, Rick Thorne or Mike Escamilla.