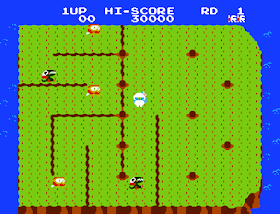 Genre: Action
Perspective: Bird's-eye view
Visual: Fixed / Flip-screen
Gameplay: Arcade
Interface: Direct Control
Published by: Bandai America
Developed by: Namco Limited
Released: 1989
Platform: Nintendo (NES)
Unlike Dig Dug, here the player is no longer underground, but is trying to get rid of enemies on a certain island, by the way, they remain the same. On the map there are points from which you can begin to dig the earth, but only for a short distance. Connecting these points in trenches, the player can drown part of the island along with enemies. If you kill them in this way, then the points are added more, but you can and the old fashioned way - pumping them with a pump until they burst.
Level select - Press Select + A + Start (on title screen, after scrolling). Level Select (pick level with Up/Down, confirm with A/B).
‹
›
Home
View web version