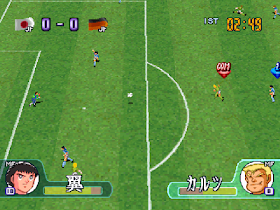 Genre: Role-Playing (RPG), Sports
Perspective: 3rd-person, Bird's-eye view
Art: Anime / Manga
Sport: Football (European) / Soccer
Published by: Bandai
Developed by: Bandai
Released: 1995
Platform: PlayStation (PSX, PS1)
Captain Tsubasa J: Get In The Tomorrow video game for the Japanese market in the genre of football simulator based on the comics of the same name (manga) where the plot mostly revolves around the boy Shingo Aoi. The game begins with the Junior World Cup tournament and the final between the national teams of Japan and Germany. For Japan, this is a formidable opponent, and besides, every Japanese schoolboy knows that it is almost impossible to score German goalkeeper Dieter Muller. This final for Japan will probably be lost, but no matter how the match ends, your players will get experience points and will certainly score their goals in the future. The maximum attainable level of players is 100 points. With each increase, the player improves his characteristics: speed, strength, endurance, and accuracy of strikes on the ball. You will learn about leveling up by the characteristic sounds as the game progresses. Note that the skill level is tied to a specific team or mode. The game has two game modes Friendly Match and Story Mode.
‹
›
Home
View web version