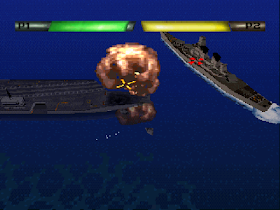 Genre: Action, Strategy / Tactics
Perspective: 3rd-person, Top-down
Visual: Isometric
Pacing: Real-Time
Gameplay: Arcade
Vehicular: Naval / Watercraft
Published by: Electronic Arts
Developed by: Realtime Associates
Released: 1997
Platform: PlayStation (PSX, PS1)
This is a game in which you are maneuvering a small fleet of powerful warships fighting an enemy (either a computer opponent or your friend) - the battles take place in the good old arcade style, so you will have the opportunity to enjoy both the strategy in the navigation mode and shooting in the near fight During the battles with a computer opponent, you have the opportunity to attack enemy bases, stop his convoys, and save hostages. The goal to achieve success is the skillful planning of attacks and the use of appropriate types of ships. The game has eight different types of ships, each of which has its own special weapons. Although all these ships have quite a lot of similarities with their real prototypes, one can hardly call this game a naval battle simulator - after all, this is a real arcade game, with elements of a strategy that turns out to be extremely effective. If you play against your friend, you will realize that in this game there is both a depth and a mass of warm-ups for reflexes. At the same time, it is still better to play together, since there is not so much variety in Battle Stations, as in such game game idols as Command & Conquer: Red Alert or Soviet Strike, but still adrenaline and exercises for the mind are enough here. Unfortunately, this is not to say that this game is perfect. She has a lot of flaws. The main problem is that battles are starting to become very uniform. In Battle Stations most of the battles boil down to the fact that two ships are facing each other and are firing as fast as they can before one of them sinks.